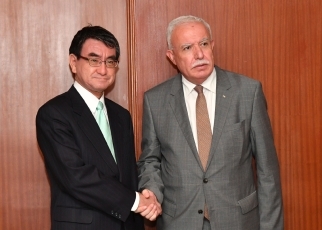 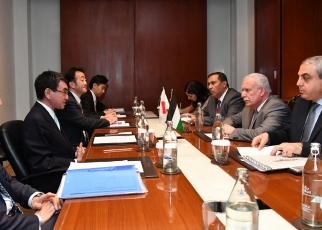 On June 26, commencing at 6:30 p.m. (local time) for approximately 50 minutes, Mr. Taro Kono, Minister for Foreign Affairs, on his visit to the Kingdom of Thailand, held a meeting with H.E. Dr. Riad Malki, Minister of Foreign Affairs and Expatriate of Palestine, on the margin of the Third Ministerial Meeting of the Cooperation among East Asian Countries for Palestinian Development (CEAPADIII). The overview is as follows.

1. Minister Kono expressed his gratitude for Minister Malki’s contribution to the Ministerial Meeting of “Corridor for Peace and Prosperity” held recently in Dead Sea, Jordan and said that holding CEAPADIIIreflected the Japanese commitment to support Palestine which is in a difficult situation.

2. In response, Minister Malki highly appreciated the Japanese initiatives including “Corridor for Peace and Prosperity” and CEAPAD and expressed his gratitude for Japan’s support for the economic development in Palestine. Minister Kono stated that Japan will continue to support Palestine through the Palestinian refugees through UNRWA and cooperation in the ICT sector.

3. The both ministers also had discussions on peace in the Middle East and reaffirmed that they will continue to cooperate in making progress on the issue.