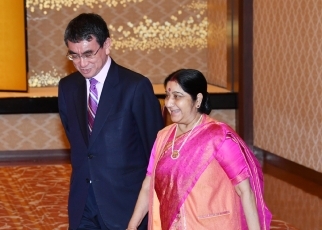 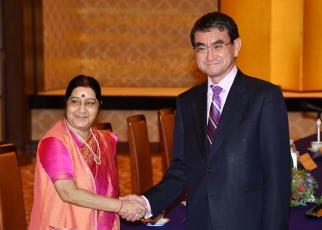 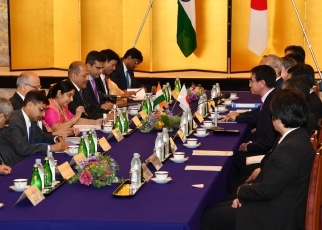 Mr. Taro Kono, Minister for Foreign Affairs, held the 9th Japan-India Foreign Ministers’ Strategic Dialogue with Ms. Sushma Swaraj, Minister of External Affairs of India, during her visit to Japan, commencing at 6:40 p.m. for about two hours on 29 March 2018.

Following the Strategic Dialogue, Minister Kono and Minister Swaraj attended the ceremony for exchange of notes for yen loans to India (about 150 billion Japanese yen) and held a joint press conference.

Minister Kono welcomed the first visit to Japan by Minister Swaraj as Minister of External Affairs, and expressed his pleasure to hold the Japan-India Foreign Ministers’ Strategic Dialogue. Minister Kono also stated that the Japan-India relationship is better than ever through the annual mutual visits by the two Prime Ministers, and that he hopes to discuss Prime Minister Modi’s visit to Japan this year. Minister Kono further stated that India is the most important partner to realize a “Free and Open Indo-Pacific

”, and that the two countries lead the way to peace and prosperity of the Indo-Pacific region and the world through further synergy between the “Free and Open Indo-Pacific” strategy and the “Act East” policy.

Minister Kono and Minister Swaraj broadly exchanged their opinions from the strategic viewpoint about the main agendas between the two countries such as politics and security, economic relations including high speed railway and ODA as well as people-to-people exchanges including Japanese language education, sports exchange and regional exchange.

The two Ministers recognized the importance of further strategic cooperation on maritime security including port calls in India by vessels of the Japan Coast Guard and the Maritime Self-Defense Forces. The two Ministers decided to strengthen the Japan-India Track 1.5 Dialogue, a framework for dialogue between governments and private sectors of the two countries, and to hold the dialogue as the “Indo-Pacific Dialogue”.

Minister Kono and Minister Swaraj exchanged their opinions on global agendas such as terrorism, UN Security Council reform, and disarmament and non-proliferation.

The two ministers exchanged their opinions on regional affairs centered on Asia, and shared the view that maximum pressure must be maintained in order for North Korea to abandon its all nuclear and ballistic missile programs in a complete, verifiable, and irreversible manner based on past lessons by North Korea. Minister Kono stated that it is necessary to resolve North Korea’s nuclear and missile issues as well as the abductions issue, and received the understanding of Minister Swaraj.