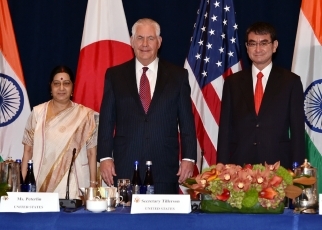 On September 19 a Japan-U.S.-India Trilateral Foreign Ministers’ Meeting was held in New York City, in the United States of America. This meeting was attended by Japan’s Minister for Foreign Affairs, Mr. Taro Kono, the United States’ Secretary of State, the Honorable Rex Tillerson,  and Minister for External Affairs of India, H.E. Sushma Swaraj.

This was the second trilateral foreign ministers’ meeting, following a meeting held in 2015, and was the first opportunity for the foreign ministers to meet under the same roof since the change in the foreign ministers of Japan and the United States. Japan, the United States, and India are partners in the Indo-Pacific region and share fundamental values such as freedom, democracy and the rule of law, as well as strategic interests. A frank exchange of views took place on matters of common interest to Japan, the United States, and India in connection with regional affairs and security. Strengthening cooperation through such dialogues will be extremely significant in terms of deepening the three countries’ strategic partnership, as well as for the stability and prosperity of the Indo-Pacific region.

At this meeting, the discussion mainly centered on the North Korea situation, maritime security, and regional connectivity.

With regard to North Korea, the three foreign ministers shared serious concerns and expressed their utmost condemnation of the repeated missile launch tests and nuclear tests. They further confirmed the importance of fully implementing the relevant United Nations Security Council (UNSC) resolutions, including the latest Resolution 2375, and preventing loopholes in the serious regime. They shared the view that the international community as a whole, including Japan, the United States, and India, should apply unprecedented pressure on North Korea.

In addition, the three foreign ministers agreed to strengthen their cooperation in the fields of maritime security and  regional connectivity in order to realize a free and open Indo-Pacific. The three countries will work together to disseminate and embed fundamental values such as freedom of navigation and the rule of law and to ensure prosperity through regional connectivity and other measures. In addition, they will further solidify cooperation in the maritime field in the future, as represented by the Japan-U.S.-India Malabar exercise in July of this year.

The three countries’ foreign ministers welcomed this meaningful exchange of views, and agreed that the trilateral dialogue among the three countries will be strengthened and maintained going forward.