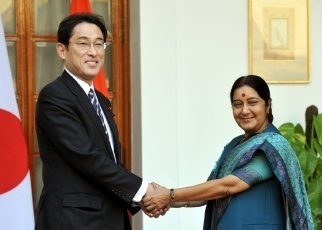 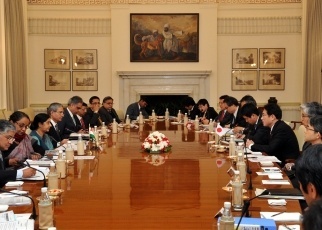 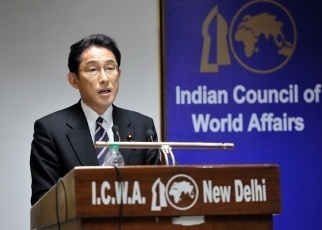 Minister for Foreign Affairs, during his visit to India, Fumio Kishida held the Eighth Japan-India Foreign Ministers’ Strategic Dialogue with Mrs. Sushma Suwaraj, External Affairs Minister of India on January 17 from 4 p.m. (Delhi time) for approximately four hours. The overview of the dialogue is as follows. The dialogue started with a small group meeting in which the two ministers discussed the enhancement of regional connectivity including the development of Northeast India, cooperation in the infrastructure field, and civil nuclear cooperation for approximately 35 minutes. The two ministers then exchanged views on the bilateral relationship, cooperation in the international arena, and strategic regional cooperation in an expanded meeting for approximately two hours. The dialogue ended with a working dinner in which the two ministers discussed mainly on regional affairs over one hour.
Ahead of the dialogue, Minister Kishida gave a policy speech at the Indian Council of World Affairs on the subject of “Special Partnership for the Era of the Indo-Pacific.”
(Note: The Japan-India Foreign Ministers’ Strategic Dialogue has been held in Japan and India alternately since 2007. The last dialogue was held in Tokyo in March 2013).

(1) Beginning
Minister Kishida said that Japan, based on remorse regarding the war, has consistently contributed to the prosperity of the world as a peace loving nation and will continue to make such contributions without swaying its footstep. Furthermore, Minister Kishida said that with the arrival of an era in which the Indo-Pacific region becomes the epicenter of global prosperity, the Japan-India partnership is a special relationship that will lead the new era and that, based on this recognition, he chose India as the first country to visit following his reappointment. Minister Kishida also explained that he gave a speech at the Indian Council of World Affairs to convey the importance of this special partnership.
(2) Political and Security Affairs
The two Ministers affirmed the promotion of political dialogue including Japan-India-U.S. trilateral cooperation, and security cooperation such as joint maritime exercises. In particular, the both Ministers agreed that a vice-ministerial-level 2+2 dialogue will be held at an early timing. Furthermore, Minister Kishida expressed his appreciation for the support H.E. Mr. Narendra Modi, Prime Minister of India, showed for Japan’s policy of “Proactive Contribution to Peace” at the Japan-India Summit Meeting in September last year and explained the current situation regarding the development of Japan’s security legislation.
(3) Disarmament and non-proliferation
Minister Kishida said that he is well aware of India’s position on disarmament and non-proliferation, while Japan is pursuing the universalization of the Treaty on the Non-Proliferation of Nuclear Weapons (NPT), and hopes that India will make constructive efforts including the continuation of its moratorium on nuclear tests. The two ministers confirmed that both countries will cooperate in areas where cooperation is possible.
(4) Economy and economic cooperation
As a follow-up to the “Japan-India Investment Promotion Partnership,” Minister Kishida explained that, in connection with the goal of doubling Japan’s direct investment and the number of Japanese companies in India in five years, as of October 2014 the number of Japanese companies in India had risen by 137 compared to the previous year, to 1,209. Minister Kishida said that the improvement of the business environment continues to be essential and that he wants to build a win-win relationship with efforts of both sides. Furthermore, Minister Kishida said that the Japanese business community has high expectations for the Japan Plus team and conveyed his strong hope that it will function effectively.
On high-speed railway system, Minister Kishida welcomed the progress on the joint feasibility study on the Mumbai-Ahmedabad route and expressed his hope that it will become the first route in which Shinkansen system is introduced in India.
Regarding ODA, Minister Kishida welcomed the recent signing of exchange of notes on a yen loan of 50 billion yen for infrastructure development in India and said that he wants to cooperate in ways that benefit both Japan and India.
(5) Science and technology cooperation
Both Ministers shared their recognition that science and technology is extremely important as a new area of strategic cooperation and shared the view that they will advance concrete cooperation as this year marks the 30th anniversary of the conclusion of the Japan-India Agreement on Cooperation in the field of Science and Technology.

2. Cooperation in the international arena and strategic regional cooperation

In connection with cooperation in the international arena, the two Ministers confirmed close cooperation in the United Nations Security Council reform. Regarding strategic regional cooperation, they exchanged views on topics such as the WTO (World Trade Organization) and RCEP (Regional Comprehensive Economic Partnership). Furthermore, Minister Kishida said that he wants to enhance connectivity within SAARC (the South Asian Association for Regional Cooperation) and that he hopes to work together with India to strengthen connectivity between SAARC and ASEAN (the Association of Southeast Asian Nations). In this regard, Minister Kishida explained that a study has been underway since this month on a project to improve the road network in Northeast India.

At the working dinner, the two Ministers exchanged views on the security environment in East and Southeast Asia, as well as that South Asia including Sri Lanka, and situations in the Middle East, Africa and other regions.