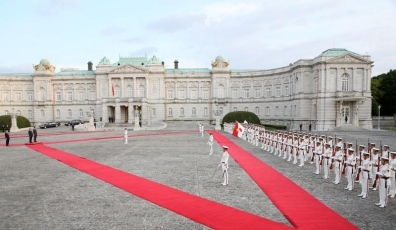 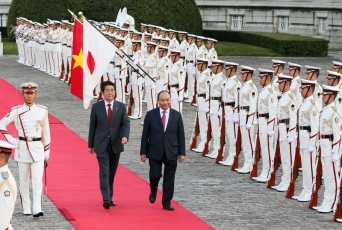 On June 6, Mr. Shinzo Abe, Prime Minister of Japan, held a summit meeting with H.E. Mr. Nguyen Xuan Phuc, Prime Minister of the Socialist Republic of Vietnam, who was making an Official Working Visit to Japan, at the Akasaka State Guest House, comprising an expanded meeting commencing at 6:15 p.m. for approximately 50 minutes, and a small meeting commencing at 7:10 p.m. for approximately 30 minutes. The overview of the meeting is as follows. The meeting was attended by Mr. Koichi Hagiuda, Deputy Chief Cabinet Secretary, Mr. Kotaro Nogami, Deputy Chief Cabinet Secretary, and others. Following the meeting, both leaders issued the Joint Statement on Deepening the Extended Strategic Partnership Between Japan and Viet Nam (English (PDF)

), attended an exchange of notes concerning cooperation, and held a joint press conference. 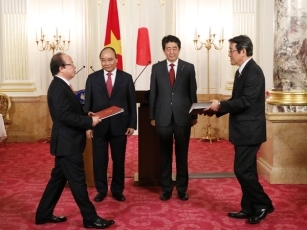 Prime Minister Abe appreciated Prime Minister Phuc’s strong determination to improve the investment environment, explained that Japan hopes to cooperate, including on Viet Nam’s industrialization strategy and state-owned enterprise reform, and stated that Japan will continue to provide support at public and private levels in the future, centering on developing quality infrastructure. Prime Minister Abe explained that he hopes business opportunities will be produced as a result of the approximately 100-billion yen of ODA projects that was signed today, and that Japanese technologies will continue to be utilized in various projects. Prime Minster Abe also stated that he intends to give concrete shape to energy cooperation, with liquefied natural gas (LNG) and high efficiency coal-fired power as the pillars, and intends to cooperate on human resources development through the Japan-Viet Nam University, the introduction of an educational model for technical colleges, and the “Innovative Asia” program. With regard to political organizational reform, Prime Minister Abe stated that Japan will cooperate proactively through cooperation such as dispatching experts and increasing the number of administrative officials admitted to training courses. Prime Minister Abe also expressed his intention to move ahead with cooperation in the health and medical fields.

Prime Minister Phuc appreciated the outcomes generated by Abenomics, stated that he hopes to use “Viet Nam-Japan Joint Initiatives” to move ahead with preparing the environment for Japanese companies to set up businesses in Viet Nam, welcomed investment by Japanese companies in Viet Nam’s energy field and supporting industries, and requested cooperation with developing supporting industries, including the automobile industry. Prime Minister Phuc explained that he wants to proceed with developing highly-skilled human resources, beginning with the Japan-Viet Nam University, and stated that he hopes to request cooperation in areas such as agricultural modernization and support for measures to combat climate change. Prime Minister Phuc also explained that Viet Nam attaches a great deal of importance to reforming administrative organizations, and he hopes to ask for proactive cooperation from Japan.

Prime Minister Abe explained that Japan intends to cooperate with Viet Nam to maintain and strengthen the free and open international order based on the rule of law in Southeast Asia as well as the Indo-Pacific region, mentioned that defense cooperation is growing closer, including the visit to Cam Ranh Port by the destroyer “JS Izumo” and coordination based on the Vientiane Vision, stated that Japan will continue to support the enhancement of Viet Nam’s maritime law enforcement capacity, including through the provision of patrol vessels, as well as human resources development in the field of search and rescue, and also intends to further strengthen cooperation and exchange between defense and coast guard authorities.
Furthermore, Prime Minister Abe expressed his intention to proactively advance cultural, sports, science and technology and people-to-people exchanges, including by promoting Japanese language education and Japanese-style education, along with explaining that he intends to cooperate closely based on bilateral memorandums of cooperation so that technical intern training programs are appropriately implemented under the new system, and also hopes to mutually cooperate in areas such as disseminating accurate information on studying abroad in Japan.

Prime Minister Phuc explained that Viet Nam is a partner that shares strategic interests with Japan, and he hopes to strengthen security cooperation. Prime Minister Phuc stated that he will continue to request support with enhancing Viet Nam’s maritime law enforcement capacity, including through the provision of patrol vessels, and also hopes to advance cooperation on the national defense industry and international counterterrorism. Furthermore, Prime Minister Phuc stated that he is grateful Japan has increased the number of Vietnamese trainees it accepts, and he will cooperate closely on growing challenges. Additionally, Prime Minister Phuc explained that he hopes to strengthen tourism, cultural and people-to-people exchanges as well as exchanges between municipalities in the run up to the 45th anniversary of the establishment of diplomatic relations between Japan and Viet Nam next year.

(1) Prime Minister Abe expressed Japan’s full support for Viet Nam as the Asia-Pacific Economic Cooperation (APEC) chair. With regard to the Trans-Pacific Partnership (TPP), Prime Minister Abe explained that at the recent TPP Ministerial Meeting in Hanoi, it was possible to demonstrate the 11 countries’ solidarity for bringing the TPP into force promptly, and he expressed gratitude for Viet Nam’s efforts, along with stating that he hopes to coordinate with Viet Nam in order to advance the discussion so that a concrete way forward can be displayed. Prime Minister Abe also stated that he hopes to cooperate on promptly concluding a high-quality Regional Comprehensive Economic Partnership (RCEP). Prime Minister Phuc explained that he is looking forward to Prime Minister Abe’s participation in the APEC Economic Leaders’ Meeting in November, and stated that he also intends to collaborate closely on matters such as the TPP and the RCEP.

(2) Both leaders shared recognition that the international community as a whole should intensify pressure in order to prevent North Korea’s nuclear and missile development, which constitutes a new level of threat. They also confirmed cooperation on promptly resolving the abductions issue.

(3) In the small meeting, Prime Minister Abe explained the “free and open Indo-Pacific strategy,” and stated that together with Prime Minister Phuc he hopes to promote cooperation on maintaining and strengthening the free and open international order based on the rule of law. Prime Minister Phuc expressed support for Japan’s initiatives, which contribute to the peace, stability and prosperity of the region and the world. Furthermore, with regard to the South China Sea problem, both leaders shared the view that dialogue among the countries concerned based on international law and self-restraint are important.