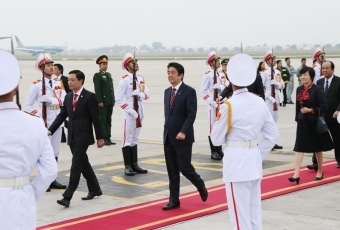 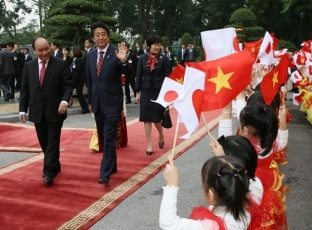 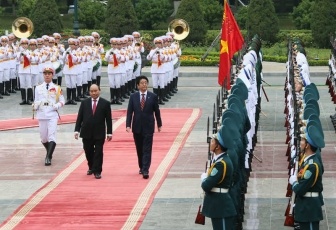 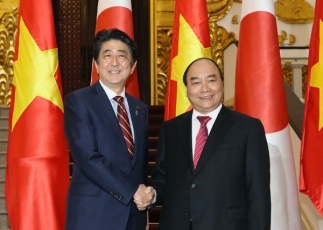 (a) Prime Minister Phuc expressed appreciation and praise for Japan’s role in contributing to peace and stability in Asia, hoping that Japan continues to play an active role in dealing with the South China Sea issue, the situation in the Korean Peninsula, and other matters. Furthermore, he expressed his hope for Japan’s consistent assistance to Viet Nam in the area of maritime security. In the field of economics, he expressed expectations that Japan would take a leading role for prosperity in Asia through expanding trade and investments, ODA provision, and broadening of its soft power.

(b) In response, Prime Minister Abe commented that for sustaining the peace and prosperity of ASEAN upon reaching its 50th anniversary, Japan will support its centrality and unity, and actively cooperate to assist the enhancement of ASEAN’s connectivity and rectification of disparities. In this respect, he stated that Japan is willing to closely collaborate with Viet Nam on regional security issues, including the South China Sea and North Korea. Regarding North Korea’s nuclear and missile developments, the two leaders concurred on the view that they both would call on North Korea to fulfill the relevant UN Security Council resolutions. Prime Minister Abe also called for understanding and cooperation to promptly resolve the abductions issue.

In relation to the next Trump administration in the US, the two leaders shared the view on the importance of gaining the understanding of Mr. Donald Trump, President-elect of the US, on the key role that the US plays in peace and stability in Asia as well as economic development. In this connection, both leaders expected the US to exercise a proactive role at the ASEAN Summit Meeting to be held in the Philippines and the APEC meeting to be hosted by Viet Nam. They shared the view that it was important to explain the political and security situation in Asia to President-elect Trump and gain his understanding of the benefits provided by Asian economies, including TPP. 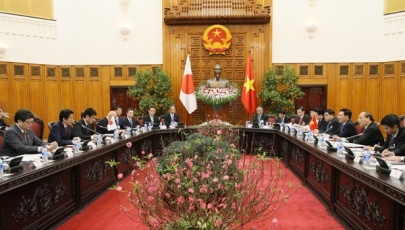 (a) Prime Minister Phuc expressed a heartfelt welcome to the visit by respectful Prime Minister Abe, very early in the new year. He commented that they had a meeting at the G7 Outreach Meeting in May 2016, and that the relationship between Japan and Viet Nam has strongly advanced in line with the spirit of the Joint Vision Statement. He affirmed that Viet Nam will consistently consider Japan as a long-term and top-priority partner.

(b) In response, Prime Minister Abe expressed his pleasure at meeting Prime Minister Phuc once again following the meeting in Laos in September, and noted that choosing Viet Nam as his first visit of the new year, as well as his third visit since his appointment as Prime Minister firmly demonstrates the importance of Viet Nam. He looked forward to working together with Prime Minister Phuc to strongly deepen the partnership between Japan and Viet Nam in all areas, and to providing full support for the success of APEC in this year where Viet Nam takes the role of the chair.

(a) Prime Minister Phuc stated his desire to strengthen high-level exchanges in order to bolster political trust between Japan and Viet Nam. He indicated that Viet Nam is placing great importance on the visit by Their Majesties the Emperor and Empress of Japan to Viet Nam, making extensive preparations to welcome them. He also invited Prime Minister Abe to the 2017 APEC meeting.

(b) Prime Minister Abe explained that Japan wished to further strengthen the friendly Japan-Viet Nam relationship based on their Extensive Strategic Partnership amid growing uncertainty and lack of transparency in political, security, and economic areas worldwide. He also requested cooperation on various areas for the success of the planned visit by Their Majesties the Emperor and Empress to Viet Nam as a symbol of friendship and goodwill between the two countries.

(a) Prime Minister Phuc expressed his hope in improving cooperation in security and defense areas and promoting transfer of defense equipment. He also voiced gratitude for the proactive assistance from the Japanese Government in strengthening maritime law enforcement capabilities and requested human resources development and early provision of new patrol vessels.

(b) Prime Minister Abe commented that Japan wished to bolster security and defense cooperation particularly in the maritime area, that it has decided to provide six new patrol vessels requested by Prime Minister Phuc, that it hoped to flesh out cooperation between Japanese and Vietnamese maritime law enforcement entities and make further advances in this field, and that it wished to enhance defense cooperation in accordance with the policy it presented (Vientiane Vision).

(a) Prime Minister Phuc stated that Japan was a partner in trade, investment, and ODA areas and that Viet Nam hoped to promote closer economic connectivity and deepen cooperation in the agricultural field. In addition, he requested assistance for quality infrastructure development and measures to address climate change. He mentioned that on this day, members of Japanese companies accompanying the Prime Minister on the visit will engage in dialogue for the first time with representatives from Viet Nam’s regional areas, and his confidence that Japanese companies could find investment opportunities through this visit. He also welcomed investments in high-efficiency coal thermal power, energy areas, and other types of infrastructure, requested imports of Viet Nam’s red-pulp dragon fruit, lychee, and other produce, and noted that Viet Nam completed procedures to lift the ban on Japanese pear.

(b) Prime Minister Abe explained that over 1,600 Japanese companies were contributing to Viet Nam’s further development through investments, job creation, technology transfers, and other activities, that CEOs and other executives from over 20 companies came on this visit, and that Japan was looking for continued improvements in the investment environment, including through the Japan-Viet Nam Joint Initiative and assistance in development of the legal system, and thereby further expansion of investment and trade. Additionally, he welcomed the lifting of bans on the same day (January16) on exports of Japanese pear from Japan and imports of Viet Nam’s red-pulp dragon fruit to Japan. Prime Minister Abe commented that Japan was the largest country source of assistance to Viet Nam, that cooperation signed thus far in fiscal 2016 totaled approximately 130 billion yen, that the approximately 120 billion yen in four ODA loan projects decided this time should create business opportunities, that Japan intended to continue to strongly support Viet Nam’s economic development through public and private activities with primary emphasis on quality infrastructure, and that it aimed to provide assistance in the health field and with other social issues. Furthermore, Prime Minister Abe stated that nuclear power cooperation was a pillar of bilateral energy cooperation, and the decision to suspend the project was regrettable, but that Japan hoped to contribute as a cooperation partner to new construction of coal thermal and LNG plants with high efficiency that are environmentally friendly. He commented that Japan hoped to cooperate on infrastructure projects with the potential to be bilateral symbols that capitalize on the significant technologies and know-how of Japanese companies and requested cooperation on rapid implementation of a satellite project. Prime Minister Abe explained that Japan intended to continue assisting Viet Nam’s state-owned enterprise reforms and requested cooperation so that Japanese companies can be larger participants in state-owned enterprises as strategic investors. Furthermore, he spoke about Japan’s interest in building a financial safety net, including the Chiang Mai Initiative, in light of risk of capital outflow accompanying US rate hikes.

(c) In response, Prime Minister Phuc stated that participation of Japanese companies in Viet Nam’s state-owned enterprises has proceeded very well and that he welcomed Japan’s cooperation with and participation in major Vietnamese companies as a strategic investor.

(a) Prime Minister Phuc noted that Japan was the first country to approve the TPP Agreement, that he respected Prime Minister Abe’s decision and efforts, that Viet Nam also placed emphasis on the TPP and was preparing for ratification, and that he hoped to work closely with Japan in RCEP negotiations.

(b) Prime Minister Abe commented that free trade was the path that the world should follow, that Japan secured Diet approval of the TPP Agreement and strongly looked forward to Viet Nam’s progress in domestic procedures toward early entry into force, and that Japan hoped to collaborate closely with Viet Nam in RCEP talks and realize an early conclusion of a high-quality agreement.

(a) Prime Minister Phuc commented that Viet Nam wished to promote education, human resources development, and cultural exchanges, that it requested ODA funding to train industrial personnel, that it intended to cooperate through the Vietnam Japan University. He stated that Viet Nam hoped to cooperate with Japan on human resources development. Additionally, he stated that 40,000 Vietnamese students were currently studying in Japan and requested consideration for Viet Nam in light of the revised Technical Intern Training program in Japan.

(b) Prime Minister Abe explained that he welcomed rapid expansion of people-to-people exchanges through festivals in various regions and TV programs introducing Japan, that Mr. Ryotaro Sugi, Special Ambassador for Japan-Viet Nam Relationships, who attended the meeting was working hard, and that Japan wished to actively engage in cultural and youth exchange programs to further increase the number of visitors to Japan and improve mutual understanding. He requested cooperation particularly for the WA Project to promote cultural exchanges. Prime Minister Abe welcomed the launch of the Vietnam Japan University with assistance from parliamentary groups in both countries last year and the start of Japanese language education in elementary schools. He explained Japan’s interest in contributing to human resources development through endowed courses that communicate Japanese-style manufacturing technologies and know-how as well as Japan-type education. He also commented that Japan hoped to begin discussions on prompt formulation of an inter-government agreement aimed at eliminating inappropriate personnel dispatch organizations and ensuring protection of trainees and that it wished for collaboration between the two countries to promote exchanges of high-quality Vietnamese overseas students.

(c) In response, Prime Minister Phuc commented that Viet Nam wished to work to increase tourists in both directions and welcomed the role of Ambassador Sugi praising his activities in promoting bilateral youth and cultural exchanges.