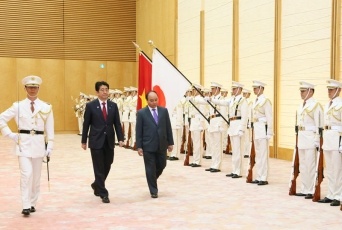 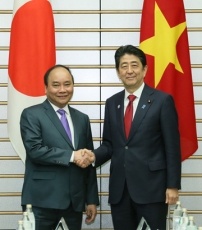 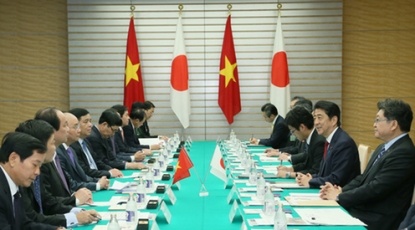 Prime Minister Phuc highly appreciated Prime Minister Abe’s role as Chair of the G7 Summit and the Outreach Meeting, and expressed his appreciation for the courteous hospitality at the Prime Minister’s Office. Prime Minister Phuc explained that Viet Nam (which has shifted to a new leadership) continues to attach importance to Japan as a long-term, crucial partner, and intends to strive to develop the bilateral relationship.

The two leaders shared the view that they will work closely together on bilateral cooperation and challenges in the regional and international arenas through active high-level exchanges and holding bilateral meetings at international conferences and fora, as well as through existing dialogues such as the Japan-Viet Nam Cooperation Committee.

Prime Minister Abe explained to Prime Minister Phuc that Japan intends to make greater contributions to developing quality infrastructure throughout the world through the “Expanded Partnership for Quality Infrastructure,” a recently-announced initiative totaling approximately 200 billion USD, along with stating that from this standpoint, notes on a yen loan for the Ho Chi Minh City Urban Railway Project Line 1 was exchanged on the same day. Prime Minister Abe also expressed expectation that the construction of Line 1 will be integrated with the development of the Ben Thanh underground shopping mall, and both projects will become symbols of Japan-Viet Nam cooperation. Prime Minister Phuc conveyed his gratitude for the Official Development Assistance (ODA) that Japan has extended to Viet Nam thus far, and stated that from the viewpoint of strengthening connectivity also, he welcomed Japanese companies’ participation in infrastructure development projects. In addition, the two leaders shared the view that they will promote cooperation in the field of human resources development, including establishing Japan-Viet Nam University and introducing technical colleges in Viet Nam.

Prime Minister Abe expressed the view that strengthening Viet Nam’s maritime law-enforcement capabilities is an urgent issue, and explained that Japan will provide solid support. Prime Minister Abe stated that the procedure for providing used vessels and a study on the provision of newly-built vessels also will be undertaken with a sense of urgency. In response, Prime Minister Phuc expressed his gratitude for the provision of used vessels to Viet Nam’s maritime law-enforcement agency, along with voicing strong expectation with regard to cooperation in the form of human resources development and the provision of newly-built patrol vessels.

The two leaders also exchanged views on the Trans-Pacific Partnership (TPP) and the Regional Comprehensive Economic Partnership (RCEP), along with sharing the view that they will promote greater cooperation based on the Japan-Viet Nam Medium-Long Term Vision On Agricultural Cooperation. 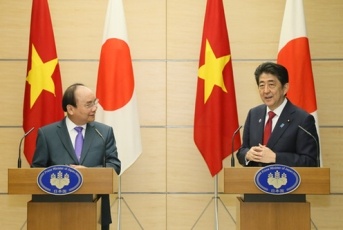 Prime Minister Abe explained that he visited Hiroshima on the previous day with the Honorable Barack H. Obama, President of the United States of America, and reiterated his resolve for a world without nuclear weapons, and stated that he also hopes to strengthen coordination with Viet Nam through the United Nations and other such fora in order to realize a world without nuclear weapons.

The leaders shared strong concerns over the further escalation in attempts to unilaterally change the status quo in the South China Sea, including large-scale and rapid land reclamation, the construction of outposts and their use for military purposes, and affirmed the importance of the rule of law at sea, freedom of navigation and flights, and peaceful settlement of conflicts. The two leaders also confirmed that Japan and Viet Nam will work together to resolve various problems related to North Korea.