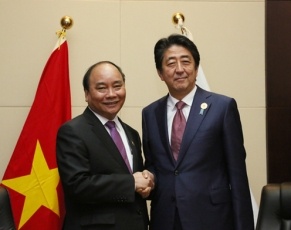 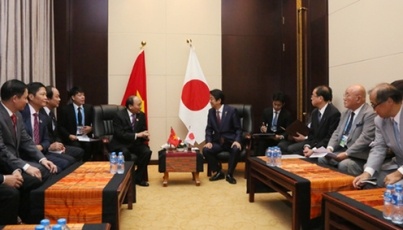 Prime Minister Abe stated that he is happy to be meeting Prime Minister Phuc for the third time this year, and conveyed his congratulations on the opening of the Japan-Viet Nam University this week.

Prime Minister Abe mentioned that an exchange of notes for an 11-billion yen loan for supporting Viet Nam’s economic reforms had been signed yesterday (September 6), and explained that Japan recently decided to provide two loans (22.8 billion yen) for Viet Nam’s climate change measures etc. In addition, with regard to the provision of new patrol vessels that Prime Minister Phuc requested, Prime Minister Abe stated that Japan will proceed with the preparations for providing the vessels promptly once procedures by the Viet Nam side are in place.

In response, Prime Minister Phuc expressed his gratitude for the Official Development Assistance (ODA) from Japan thus far and the decision to provide yen loans for financing climate change measures etc., along with expressing his hope that the provision of ODA to Viet Nam will continue, that investment in Viet Nam by Japanese companies will increase, and that regional exchanges will be strengthened. Furthermore, Prime Minister Phuc highly appreciated and expressed gratitude for the cooperation that the Japanese side has extended to Viet Nam’s maritime law-enforcement agencies thus far, and expressed his desire to continue strengthening cooperation in that field and in the national defense and security field.

Prime Minister Abe stated that the South China Sea issue should be dealt with according to the principle of the rule of law, and explained that the situation since last year is deeply concerning. In addition, Prime Minister Abe stated that dialogue should be undertaken on the premise that self-restraint will be exercised on unilateral actions such as land reclamation and the building of military outposts. Furthermore, Prime Minister Abe expressed his view that the international community should respond firmly to the series of provocative actions by North Korea, and should increase pressure through the strict fulfillment of United Nations Security Council (UNSC) resolutions (PDF) . Prime Minister Abe also mentioned North Korea’s human rights and humanitarian situation, including the abductions issue.

Prime Minister Phuc concurred with Prime Minister Abe’s comments, along with explaining that Viet Nam also intends to resolve disputes through peaceful means based on the rule of law and international law, including the UN Convention on the Law of the Sea (UNCLOS).