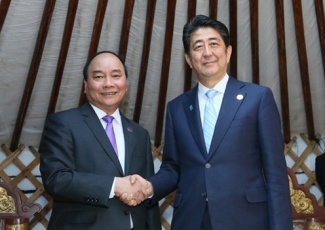 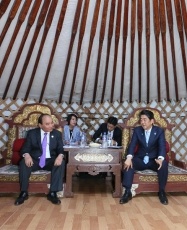 Photo: Cabinet Public Relations Office
On July 15, commencing a little after 5:30 p.m. for approximately 30 minutes, Mr. Shinzo Abe, Prime Minister of Japan, who is attending the 11th Asia-Europe Meeting (ASEM 11) Summit Meeting in Mongolia, held a summit meeting with H.E. Mr. Nguyen Xuan Phuc, Prime Minister of the Socialist Republic of Viet Nam. The overview of the meeting is as follows.

Prime Minster Phuc stated that it was an honor to meet with Prime Minister Abe, and that he would like to offer his congratulations for the victory in the House of Councillors election at the beginning of the meeting.
In response, Prime Minister Abe expressed his gratitude to Prime Minister Phuc for his presence on the occasion of the G7 Ise-Shima Summit Meeting, and his gratitude for the congratulations for the victory of the Liberal Democratic Party in the recent House of Councillors election. Prime Minister Abe also stated that he wished to continue to strengthen the trust between the two countries and strengthen cooperation in every area under the ''Extensive Strategic Partnership.''
Prime Minister Phuc expressed his gratitude for the invitation to the Outreach Meeting of the G7 Summit Meeting and for the grand welcome on the occasion and the holding of the bilateral summit, and stated that he believes that they were able to blaze a path towards progress on various important issues between the two countries.

Prime Minister Abe stated that strengthening Viet Nam's maritime law enforcement capabilities is an urgent issue and Japan would provide firm support in collaboration with the United States and Australia. He stated that the procedures to provide used vessels and the survey regarding the provision of newly-built vessels are proceeding smoothly, and that he is having the matter taken care of with a sense of urgency.
In response, Prime Minister Phuc expressed his gratitude for the expression of strong determination from Prime Minister Abe with regard to strengthening the capabilities of Viet Nam's maritime law enforcement agency, and gratitude for the powerful commitment made not only with regard to used vessels but also newly-built vessels.