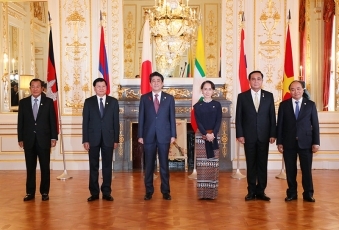 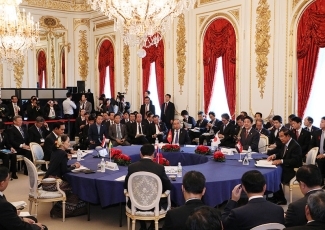 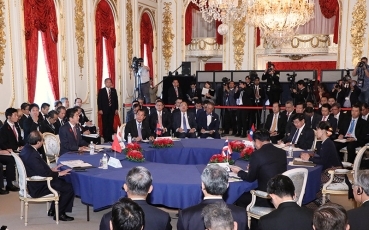 At the meeting, the “Tokyo Strategy 2018 for Mekong-Japan Cooperation(English (PDF)

),” which sets the course for future Japan-Mekong cooperation, was adopted, together with these Annexes: “Mekong-Japan Cooperation Projects for promoting SDGs (English (PDF)

1. At the beginning, Prime Minister Abe expressed his heartfelt condolences over the passing of H.E. Mr. Tran Dai Quang, President of Viet Nam, and H.E. Mr. Do Muoi, former General Secretary of the Communist Party of Viet Nam. Prime Minister Abe explained that on the occasion of the 10th anniversary of Japan-Mekong cooperation, he intends to define the relationship between Japan and the Mekong region as “strategic partners” and move forward with further cooperation.

2. Furthermore, while summing up the accomplishments of the “New Tokyo Strategy 2015 (PDF)

” and the “Japan-Mekong Connectivity Initiative (PDF)

” adopted at the Mekong-Japan Summit three years ago, Prime Minister Abe explained the three new pillars of cooperation set out in the “Tokyo Strategy 2018 for Mekong-Japan Cooperation,” which sets the course for future Japan-Mekong cooperation, as follows.

(2) People-Centered Society
In order to make growth in the Mekong region more balanced and sustainable, a society will be realized that is diverse, fair and inclusive and in which there is “no one left behind,” as is advocated in the SDGs. In particular, a society will be realized in which the socially vulnerable such as women, children and senior citizens can play active role and live with peace of mind. To this end, in order to realize the development of industries, including in the AI field, and realize the SDGs, Japan will engage in training approximately 30,000 people over the coming three years. In addition, Japan will deepen people-to-people exchanges in the lead-up to the “Mekong-Japan Exchange Year 2019” and the Tokyo 2020 Olympic and Paralympic Games.

(3) Realization of a Green Mekong
In order to address the various issues directly facing Japan and the Mekong such as climate change, disaster risk reduction, marine debris pollution and water resources management, and create a resilient society that is environmentally friendly, Japan and the Mekong countries will engage in upgrading the current “A Decade toward the Green Mekong Initiative” to the “Mekong-Japan Initiative for SDGs toward 2030,” and will aim to have it adopted at next year’s Summit Meeting.

3. In addition, Prime Minister Abe expressed his determination to strongly pursue these three pillars in coordination with the three concrete targets of (1) realizing the SDGs, (2) realizing a free and open Indo-Pacific, and (3) coordination with ACMECS, the Mekong countries’ own economic cooperation framework.
In addition, Prime Minister Abe emphasized that Japanese companies are playing an important role in the development of the Mekong region, having invested more than 2 trillion yen in the region over the past three years, and on the basis of this achievement, he expressed his determination to utilize public funds such as Official Development Assistance (ODA) and support the realization of more private-sector investment than ever before. Prime Minister Abe also asked the leaders to listen to the views of Japanese companies and move steadily ahead with preparing their countries’ investment environments.

5. The leaders from Japan and the Mekong region also exchanged views on regional affairs.

(1) North Korea situation
The leaders from both sides confirmed the importance of ensuring that the international community continues to fully implement the relevant United Nations Security Council (UNSC) resolutions in order to denuclearize the Korean Peninsula. In addition, Prime Minister Abe once again requested understanding and cooperation for the early resolution of the abductions issue, and obtained the support of the countries’ leaders.

(2) South China Sea situation
The leaders from both sides mentioned the importance of freedom of navigation and overflight and of peacefully resolving disputes according to international laws, including the UN Convention on the Law of the Sea (UNCLOS). They also expressed grave concerns about recent developments in the South China Sea, and advocated the importance of demilitarization and self-restraint.

6. At the end of the meeting, the leaders of Japan and the Mekong countries confirmed that they will hold the next Mekong-Japan Summit on the occasion of the Association of South East Asian Nations (ASEAN)-related Summit Meetings, which will be held in Thailand next year.