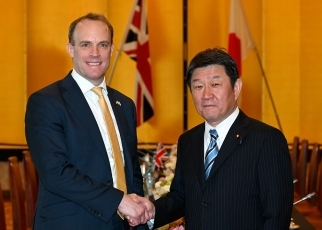 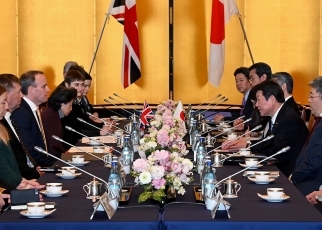 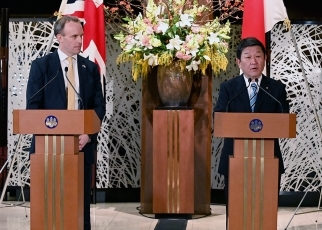 On February 8, from 11:20 a.m. for approximately 120 minutes, Mr. MOTEGI Toshimitsu, Minister for Foreign Affairs of Japan, held the Eighth Japan-UK Foreign Ministers’ Strategic Dialogue consisting of a talk and a working lunch with the Rt Hon Dominic Raab MP, Secretary of State for Foreign and Commonwealth Affairs of the United Kingdom, who was on his visit to Japan. The overview of the Dialogue is as follows.

(1) Minister MOTEGI stated that he welcomes Foreign Secretary Raab to Japan on his first visit abroad following the UK’s withdrawal from the EU. He stated that Their Majesties the Emperor and Empress of Japan will pay a visit to the UK in the second quarter of this year as their first visit abroad following their enthronement and that he welcomes the continued Japan-UK friendship and its development.

(2) Minister MOTEGI also stated that he issued the Statement by Foreign Minister noting that the Government of Japan values that the UK’s withdrawal from the EU without agreement was avoided. He stated that following the UK’s exit from the EU, Japan and the UK will remain global strategic partners which share universal values including freedom, democracy, market economy, human rights and the rule of law and that Japan is keen to further strengthen its relationship with the UK, which is expanding its engagement with Asia, in wide-ranging areas including economy, security and defense, culture and cooperation toward the realization of a Free and Open Indo-Pacific.

(3) In response, Foreign Secretary Raab stated that the UK will seek an even stronger relationship with Japan in all areas including politics, economy, security and defense, now that the UK has left the EU. He stated that Japan and the UK are the most important partners sharing universal values.

(1) The two Ministers confirmed that Japan and the UK will continue to strengthen cooperation toward the realization of a Free and Open Indo-Pacific in its respective areas including maritime security, as decided between the leaders of the two countries when Prime Minister ABE visited the UK in January 2019.

(2) The two Ministers decided to continue their efforts in adjusting dates to hold the Japan-UK“2 + 2” at the earliest timing so as to discuss policies for medium- to long-term cooperation following the UK’s withdrawal from the EU on the basis of great development in bilateral cooperation in recent years.

(3) The two Ministers reaffirmed that the two countries will quickly establish a new bilateral economic partnership. Minister MOTEGI stated that preliminary discussions have already begun at the working level and that it has been decided to start negotiations and conclude an agreement as early as possible. In response to Foreign Secretary Raab, who reiterated the UK’s interest in TPP 11, Minister MOTEGI stated that Japan welcomes the UK’s interest and will continue its support for the UK in this context. Foreign Secretary Raab expressed his appreciation to Japan’s support.

(4) Concerning the EU’s import restrictions on Japanese food products imposed after the Great East Japan Earthquake, Minister MOTEGI requested the UK’s early removal of the restrictions on the back of scientific verification, now that the UK has withdrawn from the EU

(5) The two Ministers exchanged their views on ensuring cyber security including 5G and confirmed that they will deepen their collaboration.

(6) Regarding cultural and sports exchange, Minister MOTEGI welcomes visits of the UK representatives to Japan during the 2020 Tokyo Olympic Games, and the two Ministers decided to deepen bilateral relations through “Japan-UK Season of Culture”, which bridges the Rugby World Cup in 2019 and the Tokyo Olympic Games and other events in 2020, as well as sports exchanges.

(1) Concerning the stuation in North Korea, the two Ministers reaffirmed the importance of maintaining full implementation of the UN Security Council resolutions toward the complete denuclearization of North Korea. They shared their views on the urgency of addressing ship-to-ship transfers and continued collaboration on this issue. Foreign Secretary Raab expressed his understanding and support for early resolution of the abductions issue.

(2) Regarding the situation in the East China Sea and South China Sea, the two Ministers confirmed that both countries share the position and that they will continue to cooperate closely to maintain the international order based on the rule of law.

(3) The two Ministers also discussed response to the novel coronavirus disease and decided to work closely.

(4) The two Ministers exchanged their views on the situation in the Middle East including Iran and in Asia.

(1) Regarding climate change, the two Ministers confirmed the need for ambitious, rapid and effective global action to mitigate climate change, looking ahead to the success of COP26 hosted by the UK.

(2) Concerning the UN Security Council reform, the two Ministers decided to bolster cooperation to realise an early reform of UNSC as this year marks the 75th anniversary of the establishment of the UN.

(3) In order to cooperate in such areas as the protection of human rights for journalists, Minister MOTEGI expressed the government’s intention to join the Media Freedom Coalition founded on the UK-led initiative. In response, Foreign Secretary Raab expressed his profound gratitude for this.