Lunch Meeting Hosted by Prime Minister May of the United Kingdom
and Japan-U.K. Summit Meeting 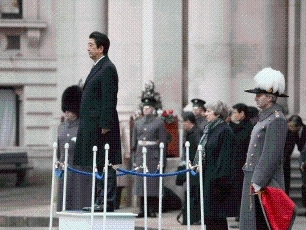 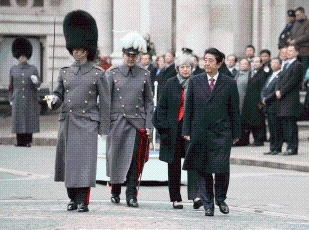 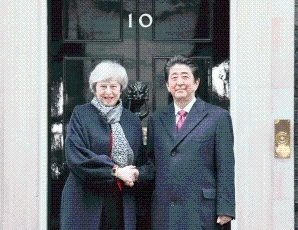 On the occasion of this summit meeting the two leaders issued a “Japan-U.K. Joint Statement”(Provisional translation（PDF）

2. Cooperation in the G20 and the international arena

The two leaders shared the view that at this year’s G20, Japan and the U.K. would lead the growth of the global economy by promoting free trade and innovation, achieving at the same time both the economic growth and the disparity reduction, and that they would cooperate on contributing to adderessing the environmental and global issues, such as climate change and plastic waste in the ocean.

The two leaders shared the view that Japan and the U.K. will cooperate on WTO reform.

(1) With regard to cooperation in the Indo-Pacific region, Prime Minister Abe welcomed the U.K.’s increasing engagement in the region. The two leaders also shared the view that they would work on further strengthening Japan-U.K. cooperation vigorously in the fields such as (i) maritime security, (ii) quality infrastructure and (iii) telecommunications infrastructure including 5G, towards realizing a free and open Indo-Pacific.

(2) Prime Minister Abe stated that Japan-U.K. security cooperation has developed significantly since Prime Minister May’s visit to Japan in August 2017, including calls at Japanese ports by British Royal Navy ships, and that the cooperation between Japan and the U.K., important partners on the security front, is opening a new chapter. Furthermore, the two leaders shared the view that the Fourth Japan-U.K. Foreign and Defense Ministerial Meeting (“2+2”) would be held in Japan this spring, that British Royal Navy ships would call at Japanese ports, and that the two countries would strengthen cooperation related to addressing “ship-to-ship transfers” by North Korea.

With regard to the North Korea situation, the two leaders shared the view that it is necessary to fully implement the relevant United Nations Security Council (UNSC) resolutions in order to achieve the complete, verifiable, and irreversible dismantlement (CVID) of all weapons of mass destruction and ballistic missiles of all ranges by North Korea. Furthermore, Prime Minister Abe also asked for Prime Minister May’s understanding and cooperation towards an immidiate resolution of the abductions issue, and obtained the support from Prime Minister May.