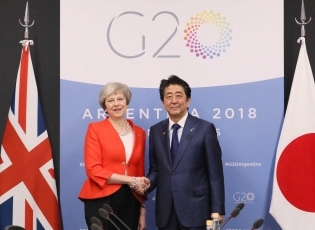 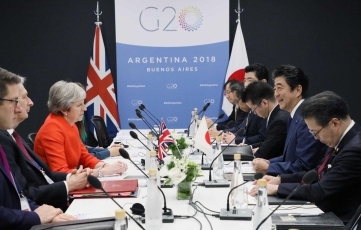 On December 1, commencing at 9:30 a.m. local time (9:30 p.m. on December 1, Japan time) for approximately 30 minutes, Mr. Shinzo Abe, Prime Minister of Japan, during his visit to Buenos Aires to attend the G20 Summit, held a Japan-U.K. Summit Meeting with the Rt Hon Theresa May MP, Prime Minister of the United Kingdom of Great Britain and Northern Ireland. The overview of the meeting is as follows.

Prime Minister Abe stated that the Japan-U.K. relationship has been developed unprecedentedly after Prime Minister May’s visit to Japan in August of last year, that the bilateral cooperation between Japan and the UK, who play the role for further strengthening rules-based international order, is important, and that he intends to cooperate to the two countries continuing to cooperate towards the G20 Osaka Summit.

The two leaders shared the view that the Japan-U.K. security cooperation has developed significantly this year and is opening a new chapter, and that they would further materialize the cooperation towards the realization of a free and open Indo-Pacific.

3. Withdrawal of the U.K. from the EU and Japan-U.K. economic relations

Prime Minister Abe welcomed the progress made in the withdrawal process between the European Union (EU) and the United Kingdom and expressed his respect for the Prime Minister May’s leadership. On this basis, Prime Minister Abe requested to avoid a “no deal” Brexit and to continue to ensure transparency, predicability and legal stability.

Prime Minister Abe also stated that, in order to strengthen the economic relationship between the two countries after the U.K.’s withdrawal from the EU, he would like to work quickly to make a new economic partnership between Japan and the U.K. based on the Japan-EU Economic Partnership Agreement (EPA).

Furthermore, Prime Minister Abe stated that Japan and the United Kingdom are among the strongest champions of free trade, and in this regard, welcomed the United Kingdom’s expression of its interest in joining the TPP11 Agreement which will enter into force at the end of the year and that he intends to cooperate towards strengthening the rules-based open and free trade system.

In response, Prime Minister May stated that the Withdrawal Agreement and the Political Declaration on the future U.K.-EU relationship agreed between the U.K. and the EU is a good deal both for the U.K. itself and for businesses based in the U.K., including Japanese companies in the U.K., and would be a good foundation for U.K. trade after the withdrawal from the EU, that she expects to discuss the U.K.’s accession to the TPP11 agreement in the near future, and that she intends to work on trade issues between Japan and the U.K., as champions of free trade, more broadly, looking ahead to next year’s G20 Osaka Summit.

(2) Regarding the situation in the East and South China Seas, the two leaders shared the view that they continue to work closely to maintain international order based on the rule of law.

The two leaders reaffirmed the importance of cooperation among Japan, Europe and the United States under the G20 framework. They also exchanged their views on responses to global issues and shared the view that Japan and the U.K. would cooperate on these issues.