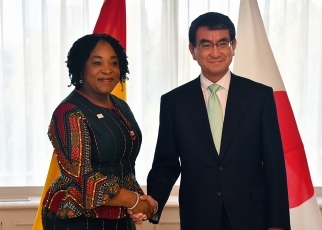 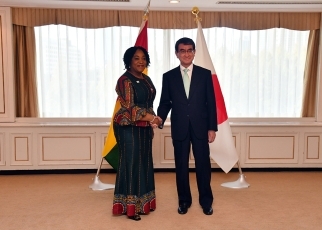 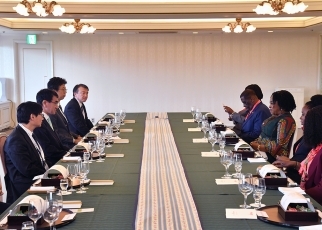 Mrs. Shirley Ayorkor Botchwey, Minister for Foreign Affairs and Regional Integration of the Republic of Ghana, who is visiting Japan for the Tokyo International Conference on African Development (TICAD) Ministerial Meeting. The overview of the meeting is as follows.

1. At the outset, Minister Kono wholeheartedly welcomed Minister Botchwey’s participation in the TICAD Ministerial Meeting, and stated that he would like to cooperate toward further promotion of bilateral relations.

2. In response, Minister Botchwey welcomed being able to meet Minister Kono again after the Women Foreign Ministers’ Meeting in September in Montreal, stated that Japan and Ghana have had strong friendly relations since the stay in Ghana of Dr. Hideyo Noguchi, and expressed gratitude for Japan’s various forms of support for Ghana until now including for health, education, and infrastructure.

3. Following that, Minister Kono indicated that Japan would support provision of nutritional supplement made by a Japanese company to improve nutrition in northern Ghana. In response, Minister Botchwey expressed gratitude.

4. Also, both Ministers confirmed cooperation toward early conclusion of negotiations on a bilateral investment treaty.

5. Furthermore, both Ministers confirmed the importance of continuing to ensure the complete implementation of the Security Council Resolutions toward the denuclearization of the Korean Peninsula. In addition, the Ministers held an exchange of views regarding cooperation in the international arena including Security Council reform, counter-terrorism, and climate change.