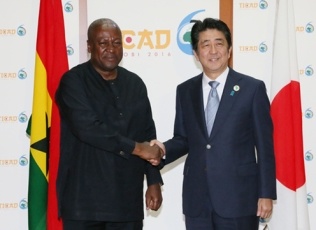 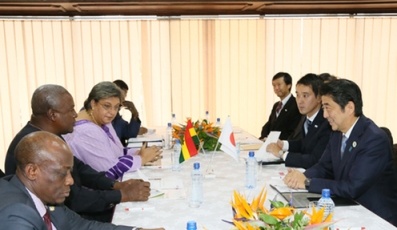 On August 26, commencing at 5:20 p.m. (local time; 11:20 p.m. Japan time) for approximately 30 minutes, Mr. Shinzo Abe, Prime Minister of Japan, who was visiting Nairobi, Kenya to attend the Sixth Tokyo International Conference on African Development (TICAD VI), held a Japan-Ghana Summit Meeting with H.E. Mr. John Dramani Mahama, President of the Republic of Ghana. The overview of the meeting is as follows.

1. At the start of the meeting, Prime Minister Abe expressed his hope to cooperate with President Mahama, who has deep connections with Japan, to achieve further advances in bilateral relations that have moved forward since President Mahama’s visit to Japan in May 2016 and contribute to the success of the historical TICAD Summit Meeting being held for the first time in Africa. President Mahama showed his appreciation for the warm welcome he received during his visit to Japan as well as for the outcome of the visit and expressed his will to contribute to TICAD VI.

2. The two leaders agreed on the importance of initiatives related to the early conclusion of an investment agreement, prompt realization of a yen loan for the Eastern Corridor Project, and advancing efforts related to universal health coverage (UHC) in Ghana. Additionally, President Mahama spoke favorably about Japan’s cooperation through ODA, including Japan’s contributions in the health and medical care field through the Noguchi Memorial Institute for Medical Research.

3. The two leaders also exchanged views on such matters as African development and cooperation in the international arena including United Nations Security Council reform.