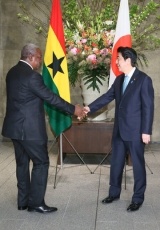 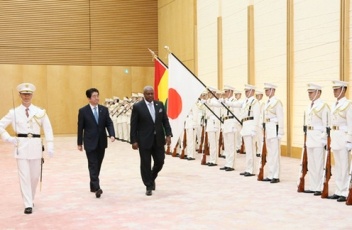 On May 18, starting at around 6:40pm, Mr. Shinzo Abe, Prime Minister of Japan, held a summit meeting for approximately 40 minutes with H.E. Mr. John Dramani Mahama, President of the Republic of Ghana, who was paying an Official Working Visit to Japan. Key points from the meeting are as follows. 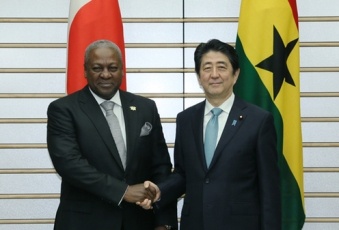 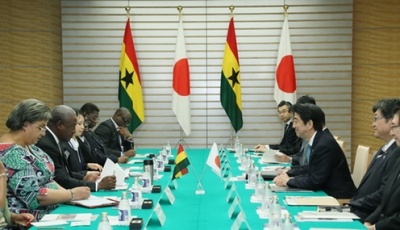 After the summit meeting, exchange of notes for two grant assistance projects (Project for the Construction of Advanced Research Center for Infectious Diseases at Noguchi Memorial Institute for Medical Research and Project for Human Resource Development Scholarship) were signed in the presence of the two leaders. The two leaders subsequently held a joint press conference and announced a joint statement (English (PDF)

). Prime Minister Abe and Mrs. Abe then hosted a dinner, where participants touched on a broad range of topics related to the bilateral relations. 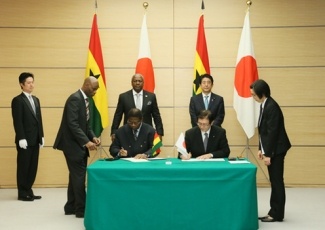 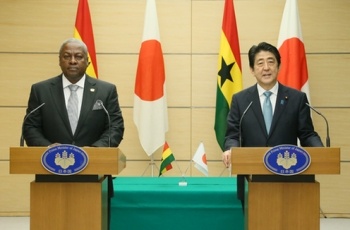 (1) Prime Minister Abe welcomed the visit by President Mahama, who has a special connection to Japan, for the first time since the Fifth Tokyo International Conference on African Development (TICAD V) held in 2013, and told that Japan hopes that this visit helps to significantly advance relations between the two countries.

(2) President Mahama expressed gratitude for the invitation to Japan and also offered words of condolence on the earthquakes centered in Kumamoto. He also reflected on Japan-Ghana relations since the time when Professor Hideyo Noguchi conducted his research in Ghana and thanked Japan for its assistance to Ghana in areas such as agriculture, healthcare, education, and infrastructure.

(1) Prime Minister Abe explained that Japan hopes to further strengthen its relationship with Ghana, especially by promoting economic ties and strengthening cooperation in the field of health. He expressed his intention to work together towards the conclusion of the ongoing negotiation of an investment treaty between Japan and Ghana at the earliest possible timing and to start consultations for an avoidance of double taxation convention between Japan and Ghana among relevant authorities. He also explained Japan’s intention to provide yen loan of approximately 100 million USD for the Construction of a New Bridge across the Volta River on the Eastern Corridor Project. Furthermore, he mentioned that Japan’s various initiatives with Ghana in the field of health would provide a model for the reinforcement of the healthcare system.

(2) President Mahama commented that the new bridge over the Volta River is important for movement of people and goods between the south and north and that the Noguchi Memorial Institute for Medical Research is a leading research organization in sub-Saharan Africa, expressing appreciation for Japan’s assistance. He also expressed interest in concluding a bilateral investment treaty and an avoidance of double taxation convention between Ghana and Japan at the earliest possible timing.

(3) President Mahama assured his participation in TICAD VI to be held in Kenya in August 2016 and voiced support for Japan’s Legislation for Peace and Security.

Both sides shared the intention to cooperate in international arena, including on topics such as United Nations Security Council reforms.