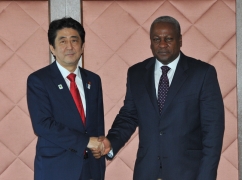 (Photo: Cabinet Public Relations Office)
On May 31, for around 15 minutes from 2:10 pm, Prime Minister Shinzo Abe had a summit meeting with H.E. Mr. John Dramani Mahama, President of the Republic of Ghana, in Yokohama. The following is the gist of the meeting. President Mahama is visiting Japan to participate in the Fifth Tokyo International Conference on African Development (TICAD V) held from June 1 to 3.
1. At the beginning of the meeting, Prime Minister Abe extended his welcome to President Mahama, who has strong ties with Japan. Prime Minister Abe also expressed his hope for development both in Africa and Japan at the TICAD V, which marks the 20th anniversary of the TICAD process. In response, President Mahama expressed his sincere gratitude for the invitation to the TICAD V and warm hospitality extended by Japan. He said that the six-year period in which he had worked for the Embassy of Japan in Ghana was one of his most valuable experiences.

2. President Mahama mentioned the longstanding exchange between Ghana and Japan since Dr. Hideyo Noguchi’s visit to Ghana, and mutual recent visits by leading figures of both countries. While expressing his gratitude for Japan’s grant aid, the dispatch of the Japan Overseas Cooperation Volunteers and support for improving infrastructure in Ghana, President Mahama expressed his desire for conclusion of investment treaty and resume of provision of yen loans. In addition, he expressed his high expectation for the success of Abenomics, efforts being made by Prime Minister Abe to stimulate the Japanese economy.

3. In response to the reference on Abenomics, Prime Minister Abe suggested President Mahama to launch “ Mahamamics”. Prime Minister Abe said that Japan values Ghana as a model nation of democracies in Africa, expressing his hope to further strengthen close ties between Japan and Ghana, which has been reinforced by President Mahama and Dr. Hideyo Noguchi. Both leaders also confirmed the launch of official negotiations for the signing of an investment treaty. Further, Prime Minister Abe stated that specific efforts are being made to resume yen loans, a grant aid was signed in the field of electricity this month, and that the preparatory survey on grant aid to improve infrastructure was newly started.