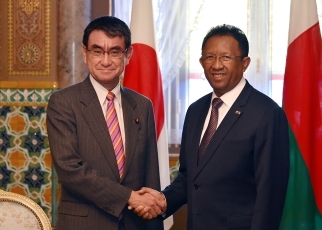 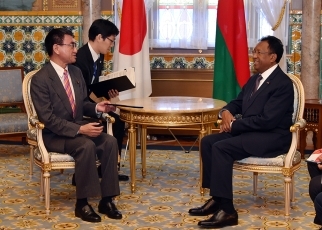 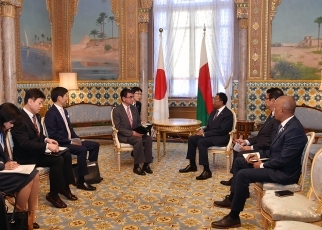 On December 6, Mr. Taro Kono, Minister for Foreign Affairs, paid a courtesy call on H.E. Mr. Rakotoarimanana Hery Martial Rajaonarimampianina, President of the Republic of Madagascar, who is paying an official visit to Japan. The overview is as follows.

1. At the start Minister Kono stated that he was pleased that a high-quality Joint Statement (French)（PDF）

had just been issued and he had been able to build a good relationship with Minister of Foreign Affairs Rabary-Njaka, and that he intended to continue to deepen cooperation in the international arena. President Rajaonarimampianina expressed his gratitude for the fruitful visit to Japan and also stated that his visit had presented an opportunity to strengthen bilateral relations and confirm that the two countries share a common position on a variety of issues faced by the international community.

2. President Rajaonarimampianina stated that Madagascar needed support from friendly countries in order to advance its development, and that it shared with Japan the value of placing people at the center of development policies. Minister Kono stated that he intended to follow up on the Toamasina port expansion project and the Ambatovy project as symbolic works of the two countries.

3. Minister Kono welcomed the fact that the two leaders shared the recognition on the issue of North Korea during yesterday’s summit meeting, and in response President Rajaonarimampianina stated that North Korea is a threat to the international community and that he requests full implementation of United Nations Security Council resolutions by North Korea.

4. In addition, the Minister and the President exchanged views on issues such as cooperation in the international arena, including United Nations Security Council (UNSC) reform.