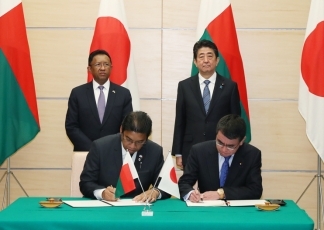 2. The overview of the projects is as follows:

(1) Support for food security in Madagascar (“Food Assistance” grant aid; grant amount of 470 million yen)
Madagascar faced a rainfall shortage due to unseasonable weather from late 2016 to early 2017, and it also suffered flood damage from a major cyclone this March, resulting in a decline in the size of its rice harvest. Furthermore, the country’s southern region constantly faces droughts caused by El Nino, and as a result around 2.1 million citizens are suffering from food shortages. With this grant aid, the Government of Japan will implement food assistance by providing 7,000 to 8,000 tons of rice to Madagascar, for the purpose of enhancing the country’s food security and improving the state of nutrition (PDF)

Japan pledged to promote food security in Africa at the Sixth Tokyo International Conference on African Development (TICAD VI), which was held in August 2016, and this grant aid will contribute to realizing that pledge.

at TICAD V, which was held in June 2013, and this grant aid will contribute to realizing that pledge.