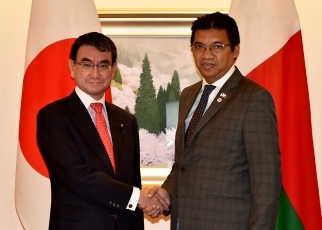 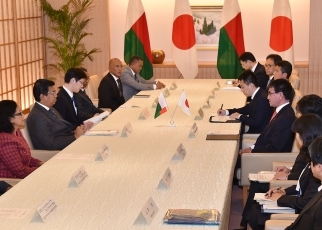 On December 4, commencing at approximately 5:25 p.m. for around 30 minutes, Mr. Taro Kono, Minister for Foreign Affairs, held a foreign ministers’ meeting with H.E. Mr. Henry Rabary-Njaka, Minister of Foreign Affairs of the Republic of Madagascar, who is accompanying H.E. Mr. Rakotoarimanana Hery Martial Rajaonarimampianina, President of Madagascar, on the president’s official visit to Japan. The overview of the meeting is as follows.

1. Minister Kono welcomed Minister Rabary-Njaka to Japan, and explained that Japan has been promoting the Free and Open Indo-Pacific Strategy and hopes to proactively cooperate with Madagascar in this regard. Minister Kono also stated that Japan intends to contribute to Madagascar’s economic and social development and improve regional connectivity through a range of cooperation, including the expansion of the Toamasina Port. In response, expressing gratitude for Japan’s support, Minister Rabary-Njaka stated that he agrees with the points Minister Kono raised, and he hopes to further strengthen the long-standing friendship between the two countries. Minister Rabary-Njaka also expressed his intention to promote Madagascar’s economic reform and social stability placing Japan as a role model.

3. In addition, the two ministers exchanged views on issues such as cooperation in the international arena, including United Nations Security Council (UNSC) reform.