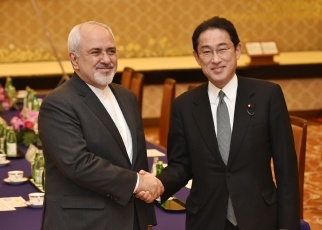 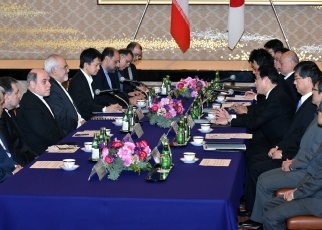 1. On December 7, Mr. Fumio Kishida, Minister for Foreign Affairs, held a Foreign Ministers’ Meeting and working dinner with H.E. Dr. Mohammad Javad Zarif, Minister of Foreign Affairs of the Islamic Republic of Iran, at the Iikura Guest House from 6pm for roughly two hours. The overview is as follows.

2. Regarding the final agreement on the Iranian nuclear issue, Minister Kishida clearly communicated Japan’s position that it continues to support the agreement and stated that continuous implementation of the agreement is important. Minister Zarif responded that Iran implements the nuclear agreement in all respects. The two ministers concurred to continue to promote cooperation in the areas of nuclear safety and safeguard measures. In this regard, Minister Kishida stated that Japan had decided to offer Iran assistance worth 550,000 euros for cooperation in nuclear safety and 1.5 million euros for cooperation in safeguard measures, both through the IAEA, in order to support continuous implementation of the nuclear agreement.

3. Regarding the bilateral relations, the two ministers confirmed steady progress in the relationship between the two countries in a wide range of areas, such as the Japan-Iran Investment Agreement (PDF)

, holding of meetings under the Japan-Iran Cooperation Council (PDF)

, and cooperation for steady implementation of the nuclear agreement. Confirming the current state of coordination for the formation of an electricity-related project, which will be the first yen-loan project for Iran in about 20 years when realized, and for the utilization of the Finance Facility, the two ministers shared the recognition that it is important to steadily implement projects of the two countries and to deliver outcomes.

4. The two ministers discussed views on the situations in East Asia and the Middle East at the working dinner. Minister Kishida stressed the importance of Iran’s even more constructive role for the resolutions of issues in the Middle East.