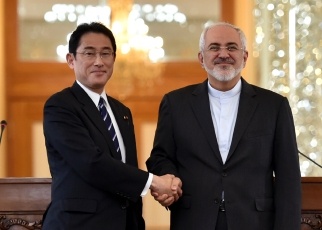 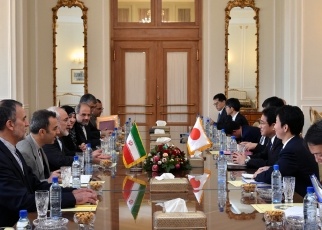 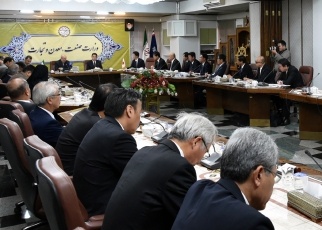 On Monday, October 12, commencing at 12:40 p.m. (local time) for approximately 80 minutes, and then commencing at 2:15 p.m. (local time) on the same day for approximately 45 minutes, Mr. Fumio Kishida, Minister for Foreign Affairs of Japan, who is visiting the Islamic Republic of Iran, held a foreign ministers' meeting and a working lunch, with H.E Dr. Javad Zarif, Minister of Foreign Affairs of Iran. The overview is as follows. (The meeting and working lunch were attended on the Iranian side by H.E. Mr. Ibrahim Rahimpour, Deputy Minister of Foreign Affairs for Asia, Oceania and CIS, and others; and on the Japanese side by Mr. Hiroyasu Kobayashi, Ambassador to Iran, Mr. Tsukasa Uemura, Director-General, Middle Eastern and African Affairs Bureau, and others).

(i) Minister Kishida stated that he was pleased to visit Iran for the first time in two years, and welcomed the conclusion of the Joint Comprehensive Plan of Action (JCPOA) as a result of long efforts, and he reiterated his respect for Minister Zarif's diplomatic efforts. Minister Kishida stated that with the final agreement realized, now is a good opportunity to advance the Japan-Iran relationship to a new level, and he intends to further strengthen bilateral relations and build a relationship with Iran that will play a proactive role in the peace and stability of the region and the international community.

(ii) In response, Minister Zarif expressed the view that high-level visits between Japan and Iran have a positive impact to the bilateral relations, and that the Japan-Iran Summit Meeting recently held in New York is one good example. He stated that in addition to this visit to Iran by Minister Kishida, he understands that H. E. Dr. Hassan Rouhani, President of Iran, invited Mr. Shinzo Abe, Prime Minister of Japan, to visit Iran, and if that visit materializes, it will further strengthen the Japan-Iran relationship. Minister Zarif stated that the history of the relationship between the two countries dates back 1,400 years, and that this is something that can only be archived between  countries that possess rich histories.

(i) Minister Kishida mentioned the importance of steady implementation of the JCPOA, and expressed his intention to further expand and strengthen economic relations between Japan and Iran now that the final agreement has been reached. Minister Kishida expressed that if the sanctions imposed by Europe and the United States are lifted after the JCPOA's Implementation Day, Japanese companies will be able to undertake full-fledged economic activities. He also welcomed the establishment of the ''Japan-Iran Cooperation Council (PDF)

,'' which overviews a wide range of Japan-Iran cooperation, and a substantial agreement that was reached on the bilateral investment agreement (BIT), expressing that he will continue to make utmost efforts to conclude and bring into force the BIT at the earliest possible date. Furthermore, Minister Kishida expressed his intention to cooperate in the field of nuclear safety and IAEA safeguards and transparency measures within JCPOA's implementation process, after Implementation Day as defined by the JCPOA. Furthermore, Minister Kishida stated that cooperation in the field of 1) environment, 2) healthcare/humanitarian, and 3) counter-narcotics is making steady progress, and he intends to further strengthen cooperation in the future. He also expressed  that cooperation in the field of culture will be implemented in the days to come.

(ii) In response, Minister Zarif stated that it is important that both the EU3 plus 3 and Iran steadily implement the JCPOA. Minister Zarif also welcomed that cooperation between Japan and Iran is progressing in a variety of fields, and expressed his hope to invigorate exchanges between Japan and Iran at various levels, to advance cooperation in the fields of nuclear safety, in which Japan possesses expertise, and to further expand Japan-Iran economic relations, building a momentum upon the conclusion of the BIT.

(1) Minister Kishida stated that the security environment in the Middle East region remains severe, and amid such situation, the role that Iran can perform as a traditional major power in the region is great. He also mentioned the importance of Iran building relationships of trust not only with countries in the region but with the international community. Additionally, Minister Kishida mentioned the importance of accelerating exchanges of views with Iran on the situation in the Middle East. Furthermore, he explained Japan's position regarding North Korea's nuclear, missile and abduction issues, and requested to sever military cooperation with North Korea.

(2) In response, Minister Zarif explained measures to counter violent extremism, including the Islamic State of Iraq and the Levant (ISIL), and Iran's views on the situation in the Middle East, including Syria. He also expressed his hope that Japan will play a proactive role in the Middle East region by holding frank dialogues. With regard to North Korea, Minister Zarif stated that Iran will cooperate by doing what it can for Japan as a friendly nation.