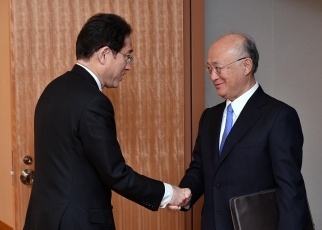 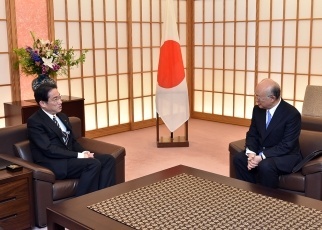 On Monday, April 25, commencing at around 2:30 p.m. for approximately 15 minutes, Mr. Fumio Kishida, Minister for Foreign Affairs, held a meeting with Mr. Yukiya Amano, Director General of the International Atomic Energy Agency (IAEA), at the Ministry of Foreign Affairs. The overview of the meeting is as follows.

1. Foreign Minister Kishida highly appreciated the IAEA’s efforts on nuclear security, to verify and monitor the Nuclear Agreement with Iran(Joint Comprehensive Plan of Action: JCPOA), address the North Korean nuclear issue, and promote the peaceful uses of nuclear energy. Notably, the Foreign Minister expressed his deep respect for “Atoms for Peace and Development” advocated by Director General Amano, and stated that he expected the Director General to exercise leadership and that Japan would continue to work with the IAEA in light of the agency’s importance. In addition, the Foreign Minister noted that Japan would support the IAEA’s efforts by disbursing 2 million euros for the Renovation of the Nuclear Applications Laboratories project (ReNuAL) through the Peaceful Uses Initiative(PUI).

(1) The IAEA is an international organization established in 1957 for the purposes of promoting the peaceful uses of nuclear energy and preventing its diversion for military purpose, based on the IAEA Statute. (It currently has 168 Member States).

(2) The IAEA extends technical cooperation to developing countries in order to promote the peaceful uses of nuclear energy in the field of nuclear power and in non-power applications such as human health, food and agriculture, water resource management, and industrial applications.

(3) It carries out verifications to ensure that nuclear materials are not used in such a wayas to further any military purpose, through safeguards agreements and additional protocols with each state.

(4) In the interest of strengthening the international non-proliferation regime by having more states enter these agreements and protocols, Japan coordinates with the IAEA to extend encouragement and support to the states concerned.

(6) IAEA Nuclear Sciences and Applications Laboratories in Seibersdorf, the suburbs of Vienna, have been under the renovation project (ReNuAL) for the modernization of the laboratories.