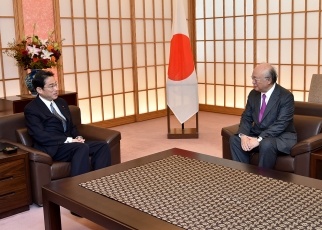 1. Foreign Minister Kishida highly appreciated Mr. Amano’s leadership and IAEA’s efforts in the realm of peaceful uses of nuclear energy and nuclear non-proliferation. Foreign Minister Kishida also stated that Japan is placing importance on the role of the IAEA related to the fulfillment and verification of the Iran nuclear agreement, and intends to cooperate closely going forward.

2. In response, Director General Amano expressed his appreciation for Japan’s support for the activities of IAEA, including publishing IAEA’s Fukushima Report, and provided an explanation concerning the IAEA’s recent activities. He then stated that he intends to continue collaborating closely with Japan going forward in areas such as the handling of the Fukushima Daiichi Nuclear Power Plant and promoting the peaceful uses of nuclear energy.