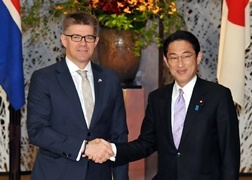 Joint Statement on Strengthening of relations between Iceland and Japan (PDF)

Minister Kishida welcomed Minister Sveinsson on his first visit to Japan, and stated that this year Ms. Mitsuko Shino was dispatched as the first resident Ambassador Extraordinary and Plenipotentiary at the Embassy of Japan in Iceland, making this a significant milestone year for relations between the two countries. He is overjoyed that Minister Sveinsson is visiting immediately after the dispatch of the first resident ambassador. Minister Kishida explained that for Japan, which adopts a proactive contribution to peace policy and which advocats greater participation in society by women, Iceland is a partner that Japan can cooperate with on various issues. Minister Kishida stated that he is willing to strengthen relations between the two countries in the lead up to the 60th anniversary of the establishment of diplomatic relations in 2016. In response, Minister Sveinsson said he is happy to be able to visit Japan for the first time, and the two countries have a lot in common, including that they are island nations with fisheries industries, and going forward also he wants to promote bilateral relations in the fields of business and trade as well.

2. Rule of law at sea; proactive contribution to peace policy

Minister Kishida commented on the importance of “the rule of law at sea,” and explained Japan’s security policy based on the proactive contribution to peace policy. Minister Sveinsson replied that Japan’s standpoint is consistent with concepts that Iceland has supported, and placing an emphasis on international law leads to international security.

Minister Kishida mentioned he wants to cooperate with Iceland in order to achieve concrete results in United Nations reform, including UN Security Council reform, in view of the 70th anniversary of the founding of the UN. Minister Sveinsson expressed his support for the need of UN reform, such as the expansion in permanent members of the Security Council, including Japan.

Minister Kishida expressed his gratitude for the special session for Japan that was set up at the Arctic Circle assembly held in Iceland from October 31 to November 2, stating that Japan wants to cooperate further on the potential and challenges arising from environmental changes in the Arctic. Minister Sveinsson replied that it is important for activities in the Arctic region to be based on the law of the sea, and he hopes for further contributions from Japan, which was granted observer status at the Arctic Council.

Minister Kishida stated Japan and Iceland are both volcanic countries and he wants to work together on risk reduction and rescues in volcanic disasters. He also said he wants to cooperate with Iceland toward the success of the Third UN World Conference on Disaster Risk Reduction to be held in Sendai in March next year. In response, Minister Sveinsson explained that volcanic eruption activity continues to occur in Iceland, and he wants to promote information-sharing and cooperation between the two countries on volcano eruption forecasting, rescues and other areas in the future.

Minister Kishida stated he wants to continue to coordinate with Iceland on the whaling issue, including cooperation at the International Whaling Commission (IWC), and Minister Sveinsson replied that whaling is a field the two countries have cooperated on for a long time and he wants to cooperate also in the future.

Minister Kishida expressed his gratitude for Iceland’s participation in the first Japan-NB8 Summit Meeting held in Milan last month, and also stated that he wants to cooperate with Iceland while utilizing its expertise in fields such as women’s participation in society. In response, Minister Sveinsson outlined an international meeting that Iceland will lead on the theme of violence against women, which only men will participate in and which is scheduled to be held in New York in January next year, and said he wants to deepen cooperation also in this field.

In addition to these topics, the two ministers expressed expectation that progress will be made with concrete cooperation on economic fields, including geothermal energy, and shared the view that collaboration on youth exchanges and Japanese language education will be strengthened. Furthermore, Minister Kishida explained the current state of Japan-China relations, including the Japan-China Summit Meeting held on the same day. Minister Sveinsson replied that he welcomes the dialogue as a first step.

After the meeting, the two ministers issued a joint statement on strengthening relations between the two countries.