Summit Meeting with the Nordic-Baltic 8 (NB8) 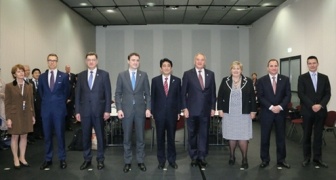 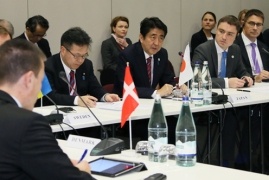 On October 17, from 2:30 p.m. to 3:30 p.m., Prime Minister Shinzo Abe, who is visiting Milan to attend the Asia-Europe Meeting (ASEM) Summit Meeting, held a meeting with the Nordic-Baltic 8 (NB8) leaders. The overview of the meeting is as follows.
The following participants took part in the meeting:

Estonian Prime Minister Rõivas, who served as Chair, said he is pleased to use the important ASEM as an opportunity to hold the NB8 plus Japan Summit Meeting. He stated that Japan is a special partner, and the Northern European region, currently achieving dynamic growth in Europe, wants to cooperate with Japan on various challenges faced by the international community. In response, Prime Minister Abe also welcomed the first Summit Meeting between Japan and the NB8, stating that Japan and the NB8 share fundamental values such as the rule of law, as well as common agendas such as sustainable utilization of the Arctic region, support for active participation by women, and an emphasis on innovation. Prime Minister Abe expressed his view that Japan places a high value on the relationship with the Nordic and Baltic region as part of "diplomacy that takes a panoramic perspective of the world map," and wants to share knowledge on various challenges and contribute to the international community as "a country that is a forerunner in finding solutions."

The participating countries shared the view that the Arctic has high potential which is attracting interest from various perspectives, including the environment, energy, transportation, and security, although the region is also environmentally fragile. They confirmed that Japan and the NB8 will cooperate in Arctic issues.

Prime Minister Abe expressed gratitude for support of Japan's participation as an observer at the Arctic Council, and explained that Japan will strengthen international joint research with Nordic and Baltic countries by utilizing Japan's scientific technology.

Prime Minister Abe introduced the "World Assembly for Women in Tokyo: WAW! Tokyo 2014" held last month, and stated he intends to steadily implement the proposals that were agreed to at the event, and to create a global movement supporting active participation by women. The participating countries expressed their views that measures for encouraging the social advancement of women and participation in childrearing by men are needed, and that the role of women needs to be supported through education in developing countries. They confirmed that Japan and the NB8 will deepen cooperation in this field.

The participating countries uniformly cited the importance of innovation, and shared their views that life sciences and technologies are indispensable in aging societies, and that economic growth can be promoted through the public and private sectors working together to advance innovation. Prime Minister Abe stated that the NB8 countries have a comparative advantage in fields such as IT, medical treatment, design of soft power content as represented by Moomin, renewable energy, and tourism resources. Prime Minister Abe also touched on demand for Japanese technologies and goods, and explained that Japan will cooperate on people-to-people exchanges and reciprocal promotions in order to promote mutual understanding among companies and citizens and draw forth the potential of both Japan and the NB8.

Lastly, Prime Minister Rõivas highly appreciated the share of recognition regarding regional affairs and the challenges shared between Japan and the NB8. Additionally, Prime Minister Abe stated that a framework for exchanging views regularly with the NB8 is significant, since NB8 has an influence on shaping international opinion and resolves challenges with unique initiatives. He also pointed out that the NB8 is not a substitute for bilateral relations with each country, but rather, it complements and strengthens those relations. The participating countries confirmed that coordination on the items discussed at the meeting will be strengthened, and that they will work together to resolve the various other challenges shared by the international community.