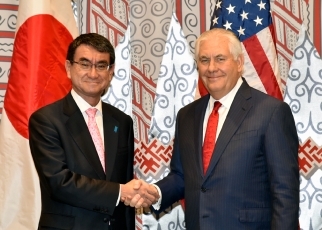 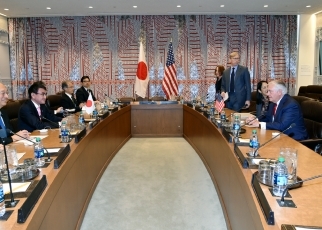 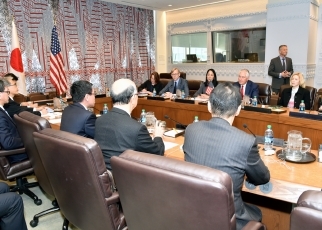 On December 15, commencing at around 9:20 a.m. for approximately 30 minutes, Mr. Taro Kono, Minister for Foreign Affairs, held a Japan-U.S. Foreign Ministers’ Meeting with the Honorable Rex W. Tillerson, Secretary of State of the United States of America. The overview of the meeting is as follows.

1. The two ministers exchanged views on the situation regarding North Korea, and reconfirmed their understanding that the denuclearization of the Korean Peninsula is essential for the peace and security of the region and the international community, and that it is necessary to increase pressure on North Korea. In addition, they confirmed that Japan and the United States will coordinate more closely in addressing the issue of North Korea at the United Nations Security Council (UNSC) in order to increase pressure, including by sending a robust message together at the UNSC Briefing on Non- proliferation/ North Korea. The two ministers also exchanged views on a meeting on North Korea, which the United States and Canada intend to co-host.

2. In addition, Minister Kono raised the issue of the incident involving a CH-53E where a window fell in the area of a sports field of Daini Futenma Elementary School.