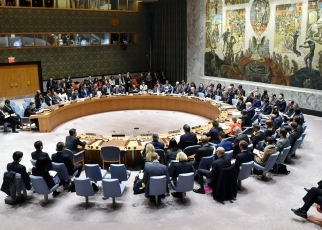 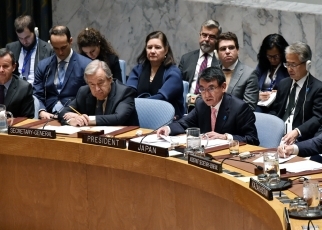 As we have all witnessed, North Korea has been escalating its outrageous acts of provocation in flagrant violation of relevant Security Council resolutions. In the past two years, North Korea has launched 40 ballistic missiles, and two of those missiles flew over Japan. They have also  conducted three nuclear tests. The one in September, North Korea purported it to be a hydrogen bomb test. Its scale was far larger than its previous tests. Their defiance of the authority of this Council is totally unacceptable.

Most recently, on November 29th, North Korea launched a ballistic missile with the range of an ICBM. This appears to be a new type. It demonstrated, once again, that North Korea poses a clear global threat to all Member States. The advancement of its nuclear program fundamentally threatens the NPT regime.

The latest launch was conducted 75 days after North Korea’s provocations in September. Some optimistic views labeled 75 days of silence as a positive signal. However, the missile launch in November made it clear that North Korea was continuing to relentlessly develop its nuclear and missile programs even while they were seemingly silent. It is ever more evident that North Korea is nowhere near ready to abandon them, nor is it interested in returning to a meaningful dialogue.

The visit by UN Under-Secretary-General Feltman only reconfirmed the dire reality. The international community should be even more alarmed by the fact that North Korea is continuing its nuclear and missile development even as we hold this meeting.

North Korea purports that its programs are for its own security, including maintenance of its regime. Quite to the contrary, it is an extremely dangerous act which goes against the international order and could affect the safety of any other Member State.

In this connection, Japan has never set as its goal regime change in other countries or regions by force. We are of the view that a peaceful solution is desirable.

However, it is North Korea that has consistently rejected such a solution. Instead it has been continuously escalating its acts of provocation. North Korea is ignoring the so-called “Agreed Framework” of 1994 and the Joint Statement of the Six-Party Talks of 2005. In betrayal of the good faith of all the countries concerned, North Korea used these talks as pretexts to continue its nuclear and missile development. Over these two decades, how has North Korea rewarded our efforts toward dialogue and assistance? North Korea employed brinksmanship and tried to win concessions.

It is our responsibility not to repeat such past mistakes as conducting dialogue for the sake of dialogue. It has only served North Korea to stall for time on its nuclear and missile development. Relevant Security Council resolutions have already clearly decided that North Korea must abandon its programs in a complete, verifiable and irreversible manner. We should not backtrack from that goal. A prerequisite for a meaningful dialogue is North Korea’s commitment and concrete action toward denuclearization.

What is important today is that the international community becomes more united and cooperates closely on maximizing pressure on North Korea by all means available. Only by doing so, we can make North Korea change its policy. The series of United Nations sanction measures are an effective means to achieve this goal.

In this regard, this Council should also be reminded of its determination, expressed in the relevant resolutions, to take further significant measures in the event of a further nuclear test or launch by North Korea.

Sanctions are the tool to make North Korea understand that there is no other way but to change its policy. The Security Council has adopted unprecedentedly strong sanction  measures, which are close to a full-fledged sanction regime. Sanctions are most effective when they are fully implemented. They must exert robust pressure on North Korea and curb their nuclear and missile programs by drastically reducing its foreign currency earnings. In this context, we strongly urge all Member States to fully implement the sanctions and close any possible loopholes. To this end, Japan is ready to assist countries which have difficulties in implementing sanction measures.

In addition, we welcome more autonomous measures targeting North Korea being introduced or reinforced in many countries. Japan calls on all Member States to take further additional measures to stop the movement of persons, goods and funds to North Korea, including severing diplomatic ties. Japan has been implementing its own strict measures. Today, I would like to announce in this Council that Japan has just introduced additional autonomous measures: we have newly designated 19 North Korean entities for asset freeze. I also call on other Member States to take similar measures.

Regrettably, the threat posed by North Korea also includes production capacity of other weapons of mass destruction, such as biological and chemical weapons. It also includes activities in the cyber space. It is reported that North Korea may be acquiring funds to further develop its nuclear and missile programs by selling weapons or through cyber thefts. We should strengthen our international network of information sharing and cooperation so that we can better cope with all possible threats.

Even as we speak, nuclear weapons and ballistic missiles are being steadily developed at the expense of the welfare of the people in North Korea. Grave violations of their human rights cannot be overlooked.

In the past, North Korean agents infiltrated Japan and abducted a number of Japanese citizens, including a girl as young as thirteen years old. Only five of the abductees returned. Many Japanese have remained in custody in North Korea. This week, a mother of one of the abductees passed away, not having seen her beloved daughter for nearly 40 years. Another family member also passed away recently. The families cannot wait forever.

It is most regrettable that only a few of the abductees have returned to their home country where their families and friends are waiting. We need to underscore our serious concern over human rights violations and abuses committed by North Korea, including those against citizens of other countries within and outside the territory of North Korea, as seen in the case of Mr. Warmbier.

The comprehensive resolution of the abductions issue and the nuclear and missile issues is the only way to realize the goal of the United Nations to maintain international peace and security, including North Korea itself.

North Korea may be able to dramatically boost its economy and improve the welfare of its people if it chooses the right path. North Korea will only be able to enjoy a bright future by resolving the nuclear and missile issues and the abductions issue.

As North Korea has yet to fulfil its commitment to denuclearization and make concrete actions toward that end, let us send a clear and unified message together here that the international community will never accept a nuclear-armed North Korea.

Japan has consistently devoted itself to create a free and democratic country, respecting human rights and abiding by the rule of law, and to support peace and prosperity in the Asia-Pacific region as a peace-loving nation. The path Japan has walked as a peace-loving nation will not change in future and contribute to the peace and prosperity of the world more than ever before.

In our meeting today, we have condemned in the strongest terms the acts of provocation by North Korea in violation of relevant Security Council resolutions. We once again made it clear that the international community will never accept a nuclear-armed North Korea. I call on all the Member States to fully implement the relevant Security Council resolutions and maximize international pressure on North Korea in order to realize a denuclearized Korean Peninsula.

After our Presidency this month, Japan will leave the Security Council. However, we will continue to cooperate closely with the remaining and incoming members, as well as non-Security Council members, so that the North Korean issue will be properly addressed in the Council.