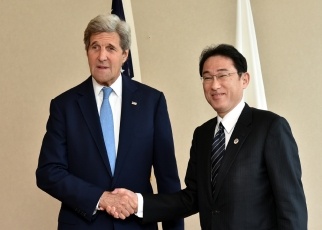 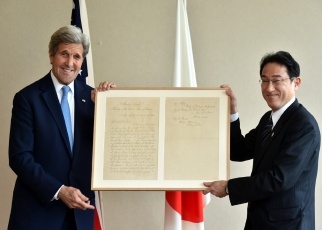 On Monday, April 11, commencing at 8:00 a.m. for approximately 40 minutes, Mr. Fumio Kishida, Minister for Foreign Affairs, held a Japan-U.S. Foreign Ministers’ Meeting with the Honorable John F. Kerry, Secretary of State of the United States of America during his visit to Hiroshima. The overview of the meeting is as follows.

(Note) Replicas of a diplomatic letter from President Abraham Lincoln to Tokugawa Shogun Iemochi and a medal and gold watch with President Buchanan’s portrait were presented. The letter is addressed to Tokugawa Shogun Iemochi and signed by President Abraham Lincoln on November 14, 1861, announcing the return of Townsend Harris the first U.S. diplomatic representative in Japan.. The medal and the watch were presented to Japanese diplomatic mission to the United States headed by Masaoki Shinmi, which was dispatched to the United States to exchange documents for the ratification of the Treaty of Amity and Commerce in 1860.

Minister Kishida expressed his intention to further strengthen the deterrence capability of the Japan-U.S. Alliance, in line with the Legislation for Peace and Security and the new Guidelines for Japan-U.S. Defense Cooperation. Concerning the lawsuits on the Henoko landfill permit, Minister Kishida explained that Japan's position remains unwavering that the relocation of Marine Corps Air Station (MCAS) Futenma to Henoko is the only solution and that Japan decided to accept a court-suggested settlement under the philosophy of ''haste is waste.'' Minister Kishida also stated his intention to realize the return of MCAS Futenma through the completion of the relocation to Henoko at the earliest possible time and would like to continue joint efforts to mitigate the impact on Okinawa. In response, Secretary Kerry said that he fully understands the decision of the Japanese government to adhere to the court-suggested settlement on the relocation of MCAS Futenma to Henoko, and stated his intention to continue to cooperate with Japan to relieve the burden on Okinawa.

In addition, Secretary Kerry commented on the increasing importance of the presence of the U.S. forces and the Japan-U.S. Alliance in light of the increasingly severe security environment, including the situations in North Korea, the East China Sea, and the South China Sea. The two ministers agreed to work together to strengthen the Japan-U.S. Alliance.

The two sides agreed on the importance of the early entry into force of the TPP Agreement.

The two sides discussed regional affairs and shared the view that Japan and the United States will cooperate with the relevant countries, while continuing to work closely with each other.

Furthermore, Secretary Kerry underscored the importance of measures to combat terrorism and violent extremism, and appraised Japan’s contributions in this regard. Minister Kishida said he intends to maintain close Japan-U.S. cooperation.