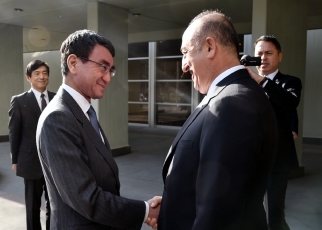 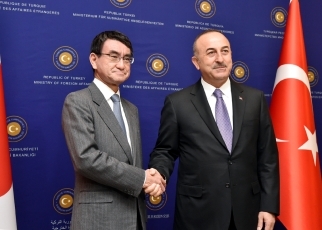 On December 28th, from 11:55 a.m. to 12:45 p.m. and from 2:40 p.m. to 3:25 p.m local time, H.E. Mr. Taro Kono, Minister for Foreign Affairs, held a Foreign Minister’s Meeting with H.E. Mr. Mevlut CAVUSOGLU, Minister of Foreign Affairs of the Republic of Turkey, during his visit to Turkey.(The meeting was intermitted by Mr. Kono’s courtesy call to President ERDOGAN.)

(1) In the beginning, Minister CAVUSOGLU said he welcomed Mr. Kono’s visit to Turkey and would like to work closely to develop further Japan-Turkey relationship.

(2) In response, Minister Kono mentioned that Japan-Turkey relationship has lots of space for development and Japan would like to expand the bilateral relationship with Turkey as a strategic partner, along with strengthening cooperation on the regional and international issues.

(1) Both ministers exchanged their views on strengthening cooperation mainly in four sectors of politics, economy, economic infrastructure/cooperation and culture.

(2) Specifically they reaffirmed the strengthening of the overall relationship.

(1) The two ministers exchanged their views on the Middle East Peace Process after the United States’ announcement regarding Jerusalem, the situation in Syria where Turkey plays an important role as well as the situation in the East Asia including North Korea.

(2) Regarding the issues of the Middle East, the ministers spent much of time by exchanging their views on Syria in particular. While Mr. CAVUSOGLU explained the current situation and the prospect of Syria from the point of Turkey as participant in Astana Process, Mr. Kono explained Japan’s position for Syria, which put priority on a political settlement. He also expressed his willingness to work closely with Turkey toward stability and peace in Syria.

(3) Regarding the issues of North Korea, Minister Kono emphasized the importance of applying greater pressure on North Korea by all means including the full implementation of the UNSC resolution adapted on December 22, which reflects the strong will of the entire international community. Both ministers agreed on the importance of the full implementation of the relevant UN resolutions.