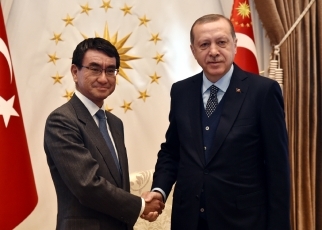 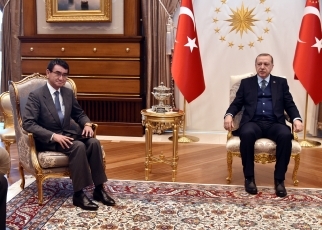 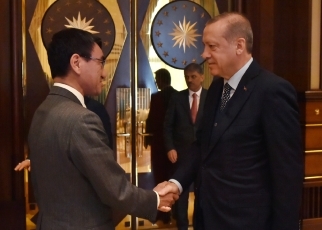 On December 28th, from 1:20 p.m. local time for approximately 55 minutes, H.E. Mr. Taro Kono, Minister for Foreign Affairs paid a courtesy call on H.E. Mr. Recep Tayyip ERDOGAN, President of the Republic of Turkey, during his visit to Turkey. The overview is as follows.

1. In the beginning, President Erdogan welcomed Mr. Kono’s visit to Turkey and asked him to send his regards to Prime Minister Abe. Mr. Erdogan expressed his willingness to expand the bilateral relationship, with the remarks of the importance of strengthening cooperation in the political sphere through coordination between the Ministries of Foreign Affairs of the two countries.

2. In response, Minister Kono revealed his high evaluation on Turkey’s position to pursue various challenges in the region under President Erdogan’s strong leadership, referring that the leadership level of relationship between Prime Minister Abe and President Erdogan have developed the bilateral relations to the strategic partnership.

3. In the context of the bilateral relationship, President Erdogan and Minister Kono reaffirmed cooperation on the negotiations of Japan-Turkey EPA and Agreement on Social Security, the Sinop Nuclear Power Plant and Turkish-Japanese Science and Technology University (TJU). The ministers also exchanged views broadly on issues of North Korea and the Middle East issues including the Peace Process, Syria, Iraq and Qatar and affirmed close cooperation between the two countries.