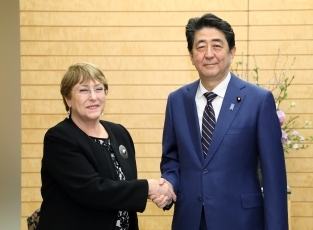 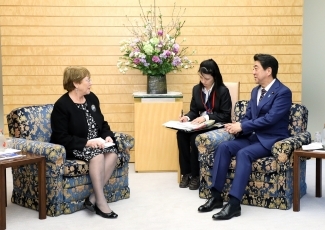 On March 22, commencing around 5 p.m. for approximately 35 minutes, Prime Minister Shinzo Abe received a courtesy call from Ms. Michelle Bachelet Jeria, United Nations High Commissioner for Human Rights, during her visit to Japan for participating in the 5th World Conference on Women (WAW!) and Women 20 (W20). The overview is as follows.

1. At the outset, Prime Minister Shinzo Abe welcomed her visit to Japan as the High Commissioner, expressed his appreciation for Ms. Bachelet’s participation in WAW! and W20, and stated that he seeks to cooperate with her in areas such as gender mainstreaming and human rights in referring to Japan’s views and efforts in these areas.

2. In response, High Commissioner Bachelet expressed her appreciation for the invitation to WAW! and W20, as well as support from the Government of Japan for the Office of High Commissioner for Human Rights (OHCHR). Furthermore, she praised Prime Minister Abe’s efforts for “a society in which women shine”, and expressed her hope for Japan’s role as the G20 Presidency. In addition, she stated that human rights constitute the foundation of Japan’s development cooperation and the concept of human security, and that she would like to collaborate and cooperate with Japan, which plays a leading role in various areas, including at the Human Rights Council.

3. In addition, both sides exchanged views on efforts to protect and promote human rights in the United Nations, as well as on the human rights situation in the world, including Asia.