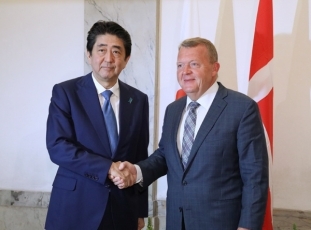 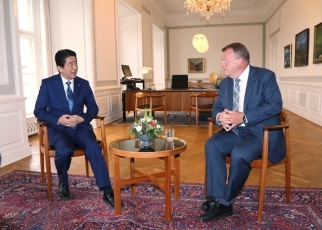 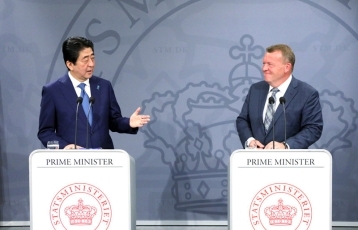 Prime Minister Abe stated that Japan placed importance on the relations with Denmark, a world’s preeminent maritime trading nation having the foundation of its prosperity on free and open oceans and free trade. The two leaders shared the view that they would further develop the strategic cooperative relations of the two countries in a wide range of areas including thorough respect of the rule of law at sea, taking the opportunity of the visit by Prime Minister Abe.

(1) Prime Minister Abe stated that relations between the two countries were close based on the historical exchanges between Japan's Imperial Family and the Danish Royal Family, and expressed his gratitude for the warm welcome when His Imperial Highness Crown Prince Naruhito of Japan visited Denmark on the occasion of the 150th anniversary of the establishment of diplomatic relations last month, including the conversation with Prime Minister Rasmussen. Prime Minister Abe further stated that he was pleased to visit Denmark in the next month following the visit of His Highness Crown Prince.

(2) The two leaders agreed to further promote the “Strategic Partnership” of the two countries by proceeding with specific cooperation in such areas as renewable energy, maritime affairs, ports and harbors, and health and medical care.

(3) The two leaders welcomed that negotiations for the revision of the tax convention recently reached an agreement in principle.

(2) Regarding the withdrawal of the UK from the EU, Prime Minister Abe stated that he was paying close attention to the UK’s negotiations to exit the EU and requested the consideration for minimizing the impact of the withdrawal on companies.

(3) Furthermore, the two leaders shared the view that amidst the recent tendency of protectionism, the achievement of the agreements in principle on the Japan-EU Economic Partnership Agreement (EPA) and Strategic Partnership Agreement (SPA) showed a powerful message to the world that Japan and the EU had the strong political will to continue to raise the banner of free trade high, and that based on these outcomes, they would continue to cooperate toward the early conclusion of these agreements.

(4) Moreover, Prime Minister Abe called for cooperation regarding the removal of the EU import restrictions on Japanese food products including those from Fukushima Prefecture.

Prime Minister Abe stated that Denmark was an important partner for Japan in its advancement of the Arctic policy, including resources development in Greenland and research development. The two leaders agreed to promote further cooperation regarding the Arctic including through the activities of the Arctic Council.

(1) Regarding the East China Sea and the South China Sea situations, the two leaders agreed to continue to cooperate closely in order to maintain the international order based on the rule of law.

(2) Regarding North Korea, the two leaders confirmed that given the ballistic missile launch by North Korea on July 4, what would be needed now was not dialogue but stronger pressure on North Korea, and that the role of China was important. Furthermore, Prime Minister Abe asked for understanding and cooperation toward the early resolution of the abductions issue.

(3) Regarding Russia, Prime Minister Abe explained the recent Japan-Russia relations, including the result of the Japan-Russia Summit Meeting on July 7.

Page Top
Back to Japan-Denmark Relations