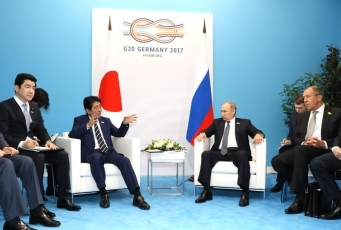 (1) Joint economic activities on the Four Northern Islands
(i) The leaders confirmed that the local research by the joint public and private research team sent to the four islands at the end of June had been very meaningful and would lead to accelerating future deliberations.
(ii) The leaders agreed to hold vice-ministerial consultations in Moscow in late August. Based on the findings from the local research, and in the lead-up to the Summit Meeting in September, discussions will be held towards substantiating projects including discussions on the legal framework that will become necessary in the future.

(2) Facilitating visits by former residents to the Four Northern Islands
(i) Regarding the special grave visit by former island residents by airplane that was not achieved in June due to bad weather condition, the leaders commended that both sides had made full preparations towards its realization. The leaders agreed to coordinate in order to realize the special grave visit at an appropriate time in September.
(ii) The leaders also discussed access for the former residents to the areas in the islands that have been closed.