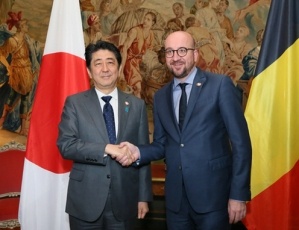 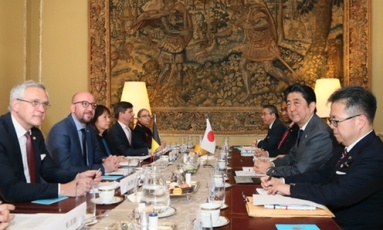 On May 3 from noon for around 50 minutes, Mr. Shinzo Abe, Prime Minister of Japan, during his visit to Brussels, met with H.E. Mr. Charles Michel, Prime Minister of the Kingdom of Belgium. The overview of the meeting is as follows. 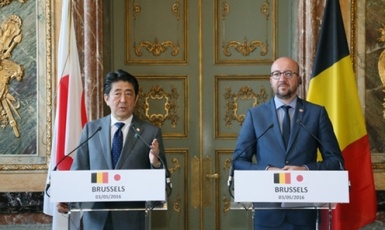 (1) Prime Minister Michel welcomed the visit of Prime Minister Abe this year on the 150th anniversary of the establishment of diplomatic relations, noted that many Japanese companies are active in Belgium, and commented that he hoped to use this occasion to further reinforce bilateral relations.

(2) In response, Prime Minister Abe expressed his condolences for the victims of the terrorist attacks in Brussels in March as well as for their families, and reconfirmed Japan’s solidarity with Belgium. He also thanked Prime Minister Michel for his solidarity and sympathy regarding the earthquake in Kumamoto Prefecture last month. He stated that Japan would like to jointly celebrate the 150th anniversary of friendship between Japan and Belgium and also like to strengthen the Japan-Belgium relations in a wide range of areas, including counterterrorism and economy, through summit-level visits.

(1) Prime Minister Abe requested cooperation of Belgian authorities to ensure safety, including that of Japanese residents, noting events being held for the 150th anniversary of friendship between Japan and Belgium

. In response, Prime Minister Michel commented that Belgium intended to make efforts for the safety of Japanese people and companies in Belgium.

(2) The two leaders praised achievement of an agreement in principle on revisions of the tax convention between the two countries, and agreed to further deepen bilateral economic ties, including in digital and ICT areas. 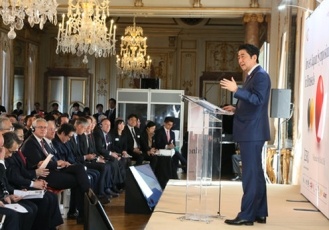 The two leaders agreed that the Minsk Agreement was the only guidance for improvement of the situation in Ukraine and agreed on the need to continue urging both Ukraine and Russia. They also exchanged opinions on China and the South China Sea situation.

The two leaders also agreed to conduct discussions on cooperation toward the development of Africa, taking into account of the Sixth Tokyo International Conference on African Development (TICAD VI) which would be held in August.