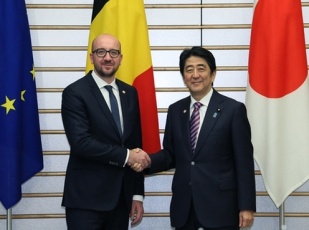 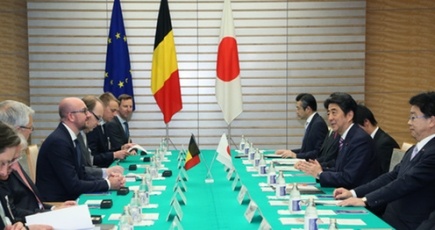 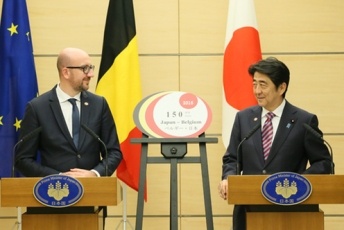 On May 13, commencing at 6:00 p.m. for approximately 45 minutes, Prime Minister Shinzo Abe held a summit meeting with H. E. Mr. Charles Michel, Prime Minister of the Kingdom of Belgium, who was visiting Japan. The overview is as follows.

The two leaders noted that between the two countries, there is close exchange between the Imperial Family and Royal Family, and confirmed that this visit to Japan will be an opportunity to further strengthen bilateral relations in the run up to the 150th anniversary of the establishment of diplomatic relations between Japan and Belgium next year, and that they will also work together to deal with the common challenges of the international community.

(2) Prime Minister Abe explained that he hopes to further strengthen the two countries’ people-to-people exchanges, including through the early introduction of a working holiday program and supporting participation by young people from Japan at the “Second French Language World Forum (2ème Forum mondial de la langue française)”, which is scheduled to be held in Liège, Belgium in July this year. Prime Minister Michel expressed his approval.

(3) Prime Minister Abe expressed his hope to cooperate on reaching an agreement in principle on the Japan-EU Economic Partnership Agreement (EPA) this year and promptly concluding the Japan-EU Strategic Partnership Agreement (SPA), and he also requested that the EU’s restrictions on importing items produced in Fukushima Prefecture be abolished or eased. Prime Minister Michel replied that the Government of Belgium also supports the Japan-EU EPA, and intends to participate fully in the negociations.

(1) Prime Minister Abe stated that he highly appreciates the proactive role that Belgium is playing in areas such as counter-terrorism, anti-piracy measures and peacebuilding support, and explained the development of seamless peace and security legislation under Japan’s proactive contribution to peace policy. In response, Prime Minister Michel mentioned the cooperation with the North Atlantic Treaty Organization (NATO) and the EU, and stated that he is interested in Japan’s efforts and is watching them closely.

(2) Both leaders shared the recognition of the need of the early realization of United Nations (UN) Security Council reform early, given that this year marks the 70th anniversary of the founding of the UN. Additionally, the two leaders shared the view that it is necessary for the international community to cooperate on responding to terrorism and radicalism, and confirmed that they will continue to cooperate on utilizing passenger name records (PNRs), in light of advancing international counter-terrorism.

The two leaders explained their respective economic policies, and also exchanged views on regional affairs, including East Asia, and Ukraine and Russia.