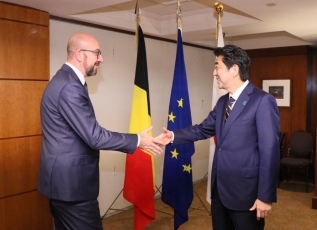 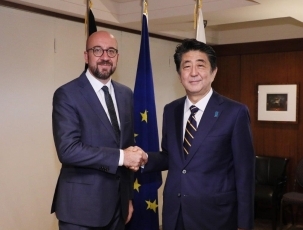 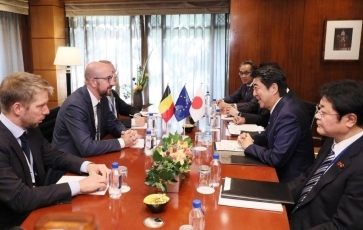 1. On September 25, commencing at 9:28 a.m. (September 25, 10:28 p.m. JST) for approximately 35 minutes, Mr. Shinzo Abe, Prime Minister of Japan, who was visiting New York to attend the 74th session of the United Nations (UN) General Assembly, held a meeting with H.E. Mr. Charles Michel, President-elect of the European Council, Prime Minister of the Kingdom of Belgium. The overview of the meeting is as follows.

3. Regarding Japan-EU relations, Prime Minister Abe stated that the Japan-EU Economic Partnership Agreement (EPA) was operating well and that he intended to make use of the agreement to further expand trade and investment. He also stated that cooperation based on the Japan-EU Strategic Partnership Agreement (SPA) was proceeding steadily, most particularly in the Europa Connectivity Forum, and that he intended to work together to expand these kinds of cooperation. In response, President-elect Michel explained about issues to which he gave priority as the President-elect of the European Council, including the withdrawal of the United Kingdom from the EU, climate change, Africa, and other foreign policy themes, and stated that he intended to cooperate with Japan, which shared the values of democracy and the rule of law. Furthermore, Prime Minister Abe welcomed the initiatives by the EU toward further easing of import restrictions on Japanese food products, etc., and then called for its cooperation toward elimination of the restrictions as early as possible.

4. Regarding North Korea, Prime Minister Abe stated that it is necessary to realize the CVID of all weapons of mass destruction and ballistic missiles of all ranges, and it is crucial to implement of the United Nations Security Council resolutions to realize it. Furthermore, he called for the understanding and cooperation towards the early resolution of the abductions issue, and President-elect Michel expressed his understanding.