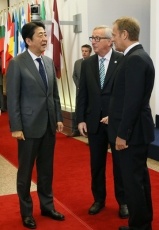 On May 3, commencing at 5:45 p.m. (local time) for approximately 45 minutes, Mr. Shinzo Abe, Prime Minister of Japan, held a summit meeting with H.E. Mr. Donald Tusk, President of the European Council, and H.E. Mr. Jean-Claude Juncker, President of the European Commission, during his visit to Brussels and subsequently participated in a working dinner meeting commencing at 6:30 p.m. for approximately 75 minutes. The overview of the meetings is as follows. 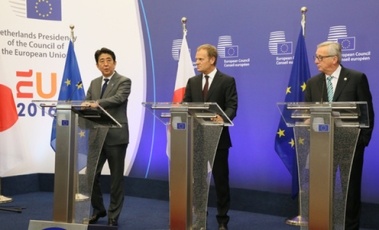 
(1) Regarding Japan-EU relations, the leaders shared the view to instruct their respective negotiators to accelerate the ongoing negotiations between Japan and the EU as strategic partners to reach agreement in principle as soon as possible during this year on the Economic Partnership Agreement and achieve an early conclusion of the Strategic Partnership Agreement.

(2) Additionally, Prime Minister Abe welcomed the start of official negotiations on a Japan-EU Air Safety Agreement, praised the steady progress in the easing of EU import restrictions on products from Fukushima Prefecture and other Japanese food items and goods, but also expressed his hope for further actions to eliminate the restrictions, and noted the importance of promoting smooth cross-border transfers of personal information and Japan’s interest in accelerating Japan-EU dialogue in this area.

(3) The leaders welcomed advances in security-related cooperation, such as collaboration between Common Security and Defense Policy mission activities and Japan’s ODA and joint exercises being conducted as anti-piracy measures in the Gulf of Aden and agreed to further strengthen cooperation in this area.

3. Regarding the Ise-Shima Summit, Prime Minister Abe commented that Japan hopes to discuss various global issues in a manner suited to the G7, which shares common values, and to show G7 unity and to send a strong message on the priority agenda such as the global economy as well as responses to terrorism and refugee issues. Prime Minister Abe also stated that an even stronger message on acceleration of structural reforms and potential flexible fiscal policies in order to drive sustainable and robust results for the global economy should be presented at the G7 Ise-Shima Summit. In response, the EU leaders spoke favorably about the G7’s agenda covering priority issues for the EU side and consented to the importance of the role of fiscal policies.

4. The leaders also conducted frank opinion exchanges on a wide range of international topics, including situations in the Middle East, Asia, and Ukraine.