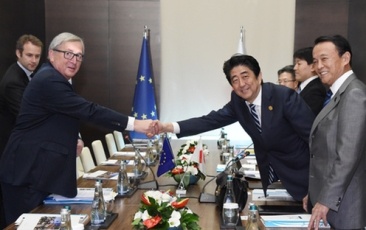 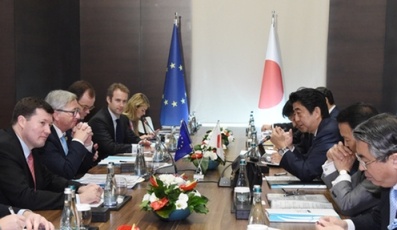 On November 15, commencing at 11:30 a.m. (local time) for approximately 30 minutes, Mr. Shinzo Abe, Prime Minister of Japan, who is currently visiting Antalya, held a meeting with H.E. Jean-Claude Juncker, President of the European Commission, at a site of the G20 Antalya Summit. The overview of the meeting is as follows.

1. At the beginning, Prime Minister Abe welcomed his second meeting with President Juncker this year following the Japan- EU Summit held in Tokyo in May. Prime Minister Abe expressed the view that the acts of terrorism in Paris are an assault against the common values that Japan and the EU share and uphold, and that the international community should unite in resolutely denouncing them. Prime Minister Abe explained that Japan intends to work closely with the EU on counterterrorism measures as well as to cooperate with the EU, its strategic partner, for the peace and stability of the international community.

In response, President Juncker welcomed the second meeting between the two leaders this year. President Juncker expressed the view that due to the terrorist attacks in Paris the atmosphere at this G20 summit differs from G20 summits thus far, and stated that the recent acts of terrorism represent an attack not only on the people of France, but on common values, and democracy needs to be firmly maintained.

2. With regard to Japan-EU relations, President Juncker explained that he attaches importance to the negotiations on the Strategic Partnership Agreement (SPA) and the Economic Partnership Agreement (EPA) with Japan, a strategic partner for the EU, and that there is a need to accelerate the negotiations. Prime Minister Abe replied that there has been certain progress, but still remain areas where further progress in the discussions is required. The two leaders shared the view that they would instruct their respective chief negotiators to accelerate the negotiations and continue to do their utmost efforts to reach agreement in principle this year, and, if not, to achieve such agreement at the earliest possible time in the course of next year.

3. In addition, Prime Minister Abe explained that Japan enacted its Legislation for Peace and Security in light of its policy of proactive contribution to peace based on the principle of international cooperation, and that Japan intends to continue further contributions to the peace and stability of the international community President Juncker stated that it is encouraging that Japan will serve as a non-permanent member of the United Nations Security Council (UNSC) next year. President Juncker expressed the view that Japan is thoroughly fulfilling its role in the international arena and greatly welcomed the Legislation for Peace and Security as a demonstration in this regard. The two leaders also exchanged views on joint efforts to ensure the success of the 21st Conference of the Parties (COP21), cooperation in the run-up to the G7 that Japan will chair next year as well as the situation in Asia and Ukraine.