The 27th Meeting of the Energy Charter Conference (Overview and Evaluation) 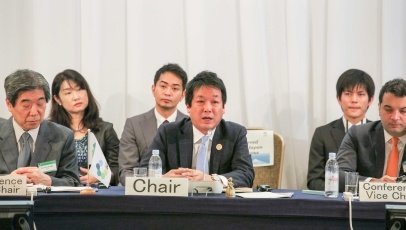 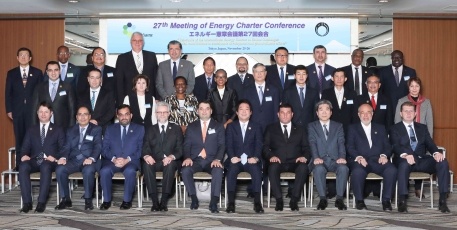 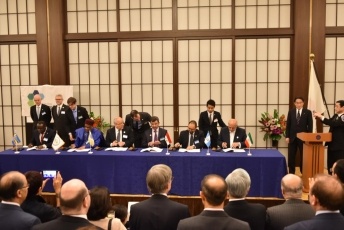 (2) Following the Statutory Session in the morning on November 25, the Ministerial Session was held on November 26 and Mr. Kentaro Sonoura, State Minister for Foreign Affairs delivered the opening remarks (English (PDF)

) was issued as an outcome document. Mr. Kazuo Kodama, Ambassador of Japan to the European Union, Vice-Chair of the Energy Charter Conference, chaired the Statutory Session and assisted State Minister Sonoura at the Ministerial Session.

(3) The outreach side-event on the theme of “Global Architecture and Its Implications in Asia” will be held in the afternoon on November 25. Mr. Motome Takisawa, Parliamentary Vice Minister for Foreign Affairs of Japan attended the side-event and discussions was held on the impact and future prospects for strengthening energy security in Asia.

(4) In addition, the welcome reception hosted by Foreign Minister Kishida and the signing ceremony of the International Energy Charter was held under the patronage of Foreign Minister Kishida in the evening on November 25. The International Energy Charter is a political declaration supporting the modernization of the Energy Charter Process. The six parties, namely Iran, Guatemala, Iraq, the Economic Community of Central African States (ECCAS), the Permanent Secretariat of the Group of Five for the Sahel (G5 Sahel) and the East African Community (EAC), signed the Charter and became recognized as Observers of the Energy Charter Conference.

(2) During the Japanese Chairmanship, Bosnia and Herzegovina, Senegal and Rwanda signed the International Energy Charter. In addition, at the margin of Tokyo Conference, Iran, Guatemala, Iraq and three African regional organizations signed the Charter in Tokyo and Yemen has completed the accession process of the Energy Charter Treaty (ECT), which means that Japan contributed to advancing robustly the Energy Charter Process and to expanding the Process in a geographic context.

(3) As the Chair’s initiative, Japan issued the “Tokyo Declaration on the Energy Charter” based on the discussion among the members. The Tokyo Declaration affirmed that the ECT contributes to strengthening rule of law and to improving the business environment in energy field and also the importance of promoting appropriate and sustained energy investments and quality infrastructure investments are reiterated. Japan contributed greatly the discussion on roles of the Energy Charter and the way forward.

(4) Through the outreach side-event and the welcome reception, Japan encouraged understanding of the relevance and use of the ECT to the Japanese companies in order to promote oversea energy investment by these companies.

Page Top
Back to Energy