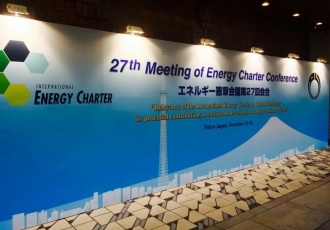 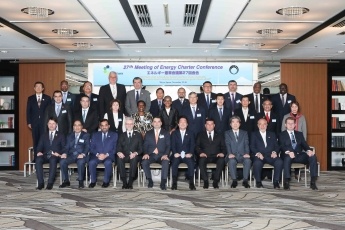 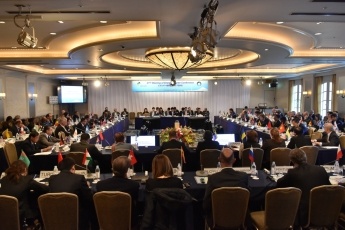 1. On November 25 and 26, Japan hosted the 27th Meeting of the Energy Charter Conference in Tokyo as the chair, for the first time in East Asia. Representatives from 69 countries and regions, including 32 Ministerial-level participants, among them Ministers from Georgia, Afghanistan, Iran, Jordan, Romania, Slovakia, Swaziland, Uganda, and 9 international institutions attended the meeting.

2. Following a welcome reception hosted by Mr. Fumio Kishida, Minister for Foreign Affairs and the experts’ meeting, on November 25, the Ministerial Session on November 26 was attended by Mr. Kentaro Sonoura, State Minister for Foreign Affairs, as the head of Japanese delegation, and as the acting chair of the Energy Charter Conference. At the Welcome and Opening Session, State Minister Sonoura delivered remarks on the transformation of global energy landscape and addressed issues that the international community is facing in the energy field including the energy transition, as well as the importance of energy investments, the effectiveness of the Energy Charter Treaty (ECT) in promoting investments, and its significance and importance for Asia (Opening Remarks (English (PDF)

3. At the Ministerial Session, participants engaged in a lively discussion on possible contributions by the ECT to address climate change and sustainable development, including energy access, as well as the potential role and possibilities of the Energy Charter in dealing with major global energy issues from the viewpoint of Asian emerging countries and African countries.

4. The “Tokyo Declaration on the Energy Charter (English (PDF)

)” was issued as an outcome document. The Tokyo Declaration affirmed that the ECT contributes to strengthening rule of law and to improving the business environment in energy field and also the importance of promoting appropriate and sustained energy investments and quality infrastructure investments are reiterated. Additionally, it affirmed plans to strengthen outreach activities to invite new signatory parties to the International Energy Charter and new participants in the ECT, under the recognition that increasing value of the ECT makes geographically broadening the Energy Charter process important.

(2) Participants of the Ambassadors in Tokyo

(1) In 1991, the European Energy Charter (political declaration) was signed for the purpose of promoting market-oriented reform in the energy sector, and encouraging a stable and favorable climate for energy trade and investment against the backdrop of the disintegration of the Soviet Union.

(2) To establish a legal framework to promote cooperation in the energy field in accordance with the objectives and principles of the Charter, the Energy Charter Treaty (ECT) was adopted in 1994 and entered into force in 1998. Japan ratified the treaty in 2002.