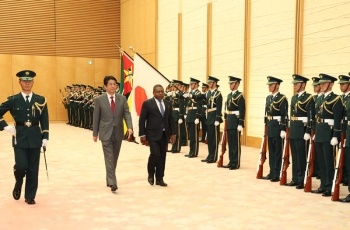 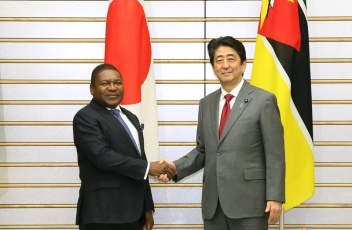 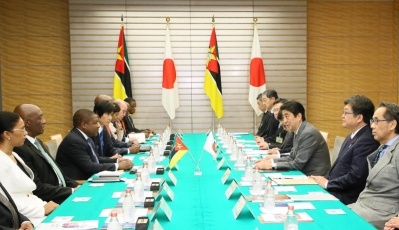 On March 15, commencing at 6:10 p.m. for approximately 45 minutes, Mr. Shinzo Abe, Prime Minister of Japan, held a summit meeting with H.E. Mr. Filipe Jacinto Nyusi, President of the Republic of Mozambique, who was during his Official Working Visit to Japan. The overview of the meeting is as follows.

Following the summit meeting, the Exchange of Notes concerning Japanese grant assistance on “The Project for Construction of Bridges on N380 in Cabo Delgado Province” and the Memorandum of Cooperation in the field of urban transportation in Maputo were signed in the presence of the two leaders. Subsequently the two leaders held a joint press conference and issued the Joint Statement between Japan and the Republic of Mozambique (English (PDF)

). Prime Minister Abe and Mrs. Abe then hosted a dinner where the two leaders had conversation on a broad range of topics relating to the bilateral relations.

(1) Prime Minister Abe welcomed President Nyusi on his first visit to Japan, noting that Mozambique is full of potential being blessed with the sea and resources, and it attracts a great deal of interest from Japanese companies. Prime Minister Abe mentioned that this year marks the 40th anniversary of the establishment of diplomatic relations between the two countries and that together with President Nyusi, he would like to significantly enhance the bilateral relations together with President Nyusi.

(2) In response, President Nyusi expressed his gratitude for Japan’s invitation and his intention to make this visit to Japan as an opportunity to further enhance the relationship between Japan and Mozambique.

Prime Minister Abe explained that the “Free and Open Indo-Pacific Strategy” will cement ties between Asia and Africa, and that he would like to cooperate with the President towards its realization.

Prime Minister Abe mentioned that in 1993 Japan dispatched Self-Defense Force personnel for peace-keeping operations (PKO) to Mozambique for the first time in Africa and welcomed the significant development that Mozambique has achieved for the past twenty or more years. The Prime Minister went on to mention that Japan would continue to attach importance to peace and stability in Africa under the policy of “Proactive Contribution to Peace”

(3) Cooperation in the economic field

and requested further improvement of the business environment in Mozambique. Prime Minister Abe expressed his intention to continue to cooperate with Mozambique in order to develop the Nacala Corridor region, which is an important corridor in Southeast Africa. In response, President Nyusi mentioned that he would like to cooperate with Japanese companies and expressed the view that cooperation on Nacala Corridor development has been making progress.

Prime Minister Abe thanked President Nyusi for attending the Sixth Tokyo International Conference on African Development (TICAD VI) in August last year. Prime Minister Abe also welcomed the Follow-up Meeting at ministerial level to be held in Mozambique this year, expressing his intention to cooperate closely to make it a success. In response, President Nyusi expressed his appreciation for Japan’s attitude towards Africa, and stated that he intends to warmly welcome the participants of the Meeting in Maputo.

3. Regional affairs and strengthening cooperation in the international arena

The two leaders shared the view to promote UNSC reform together.

The two leaders shared the recognition that free, open and stable maritime order based on international law, ensuring freedom of navigation and overflight, non-militarization, and the peaceful resolution of disputes are important for ensuring regional peace and security. In response to the Prime Minister’s explanation on the situation in the East China Sea and South China Sea, President Nyusi expressed his respect for Japan’s position.

The two leaders condemned North Korea’s nuclear tests and missile launches in the strongest terms and shared the importance of resolving outstanding issues of concern, including the abduction of Japanese citizens.