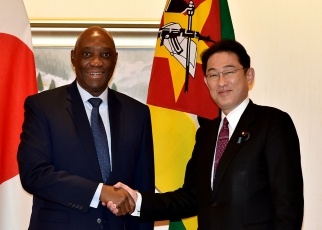 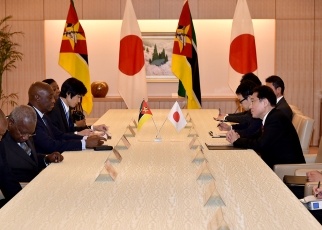 On March 14, commencing at 10:00 a.m. for approximately 30 minutes, Mr. Fumio Kishida, Minister for Foreign Affairs, held a meeting with H.E. Mr. Oldemiro Júlio Marques Baloi, Minister of Foreign Affairs and Cooperation of the Republic of Mozambique, who is visiting Japan. The overview of the meeting is as follows.

1. Minister Kishida welcomed Minister Baloi in this milestone year commemorating the 40th anniversary of the establishment of diplomatic relations between Japan and Mozambique, along with conveying Japan’s decision to provide assistance to the victims of the damage caused by the cyclone and drought that occurred in Mozambique. In response, Minister Baloi expressed his gratitude for Japan’s consistent frontline support during Mozambique’s times of distress.

2. Minister Kishida welcomed that this year’s Sixth Tokyo International Conference on African Development (TICAD VI) Ministerial Follow-up Meeting will be held in Mozambique, and conveyed that he is looking forward to serving as co-chair with Minister Baloi. Minister Baloi replied that he intends to cooperate to make the Ministerial Meeting a success.

3. The two sides exchanged views on strengthening bilateral cooperation, including in the field of economy, and Minister Kishida stated that he intends to continue cooperating in order to develop the Nacala Corridor Region. In response, Minister Baloi welcomed Japan’s assistance and investment in the region. In addition, the two sides also discussed various issues including regional affairs.