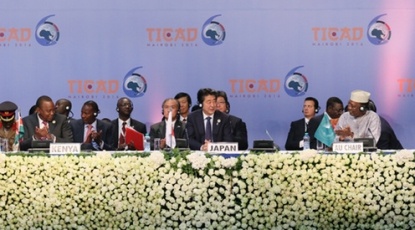 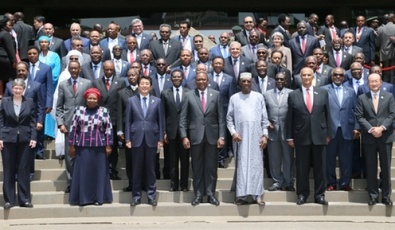 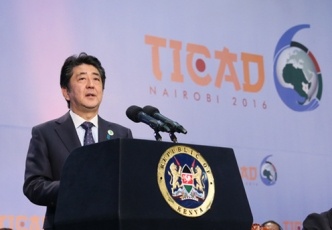 Photo: Cabinet Public Relations Office
The Sixth Tokyo International Conference on African Development (TICAD VI) was held in Nairobi, the Republic of Kenya, on August 27 and 28. The overview is as follows. This TICAD was the first to be held in Africa. Mr. Shinzo Abe, Prime Minister, attended from Japan, and served as co-chair along with Mr. Uhuru Kenyatta, President of Kenya (the host country), and Mr. Idriss Deby Itno, President of the Republic of Chad (Chairperson of the African Union (AU)).

Including side events within the venue, over 11,000 people participated in TICAD VI, including the representatives of 53 African countries as well as development partner countries and Asian countries, international and regional organizations, the private sector, and civil society such as nongovernmental organizations (NGOs). In addition, a business mission with leaders from 77 organizations including Japanese businesses and universities accompanied Prime Minister Abe and introduced Japanese private-sector initiatives at each session.

2 Overview of the main sessions

(1)At the Opening Session, Prime Minister Abe announced that for a period of three years from 2016 to 2018, Japan will invest for the future of Africa through implementing measures centering on developing quality infrastructure, promoting resilient health systems and laying the foundations for peace and stability, amounting to approx. USD 30 billion under public-private partnership. These measures include human resource development to 10 million people ("Empowerment") by making use of the strength of Japan ("Quality"). Prime Minister Abe also explained that this commitment is the first step in putting this year's G7 Ise-Shima Summit outcomes into practice, and as the G7 president, Japan will steadily realize those outcomes.

(2)At Plenary Session 1, the leaders and other senior officials of African countries had active discussions on responding to the new challenges that Africa faces, such as declining international resources prices, Ebola virus disease outbreaks and the fragility of the health system, and threats to peace and stability. In addition, leaders of many countries mentioned the keynote address delivered by Prime Minister Abe and highly appreciated Japan's efforts.

(3)At the Thematic Sessions, active discussions were held on means for achieving the promotion of 1) economic diversification and industrialization; 2) resilient health systems; and 3) social stability, which are TICAD VI's priority areas. In all areas, appreciation and expectations were expressed for public-private initiatives that utilize Japan's strengths. (4)At Plenary Session 2, initiatives for encouraging private-sector companies to establish businesses in Africa were discussed. Prime Minister Abe announced that the Government of Japan will promote negotiations on investment agreements and tax agreements and set up the Japan-Africa Public-Private Economic Forum in order to support private-sector companies in establishing businesses in Africa. Following that, representatives of the Japanese business community such as Mr. Sadayuki Sakakibara, Chairman of Keidanren (Japan Business Federation) introduced initiatives for African development that utilize Japanese companies' expertise and technologies, and along with that, African leaders and representatives of Africa's business community appreciated the efforts of Japanese companies and expressed expectations of further investment promotion.

(5)At the Closing Session, the Nairobi Declaration was adopted as the TICAD VI outcome document.

3 Separate meetings and other events

Prior to TICAD VI, on August 25 Minister Kishida held the Ministerial Pre-Conference Meeting together with Ambassador Amina Mohamed, Cabinet Secretary for Foreign Affairs of the Republic of Kenya, and Ms. Mariam Mahamat Nour, Minister of Planning and Prospective of the Republic of Chad, in order to consolidate the content of the Nairobi Declaration at the ministerial level.