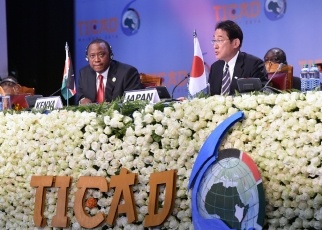 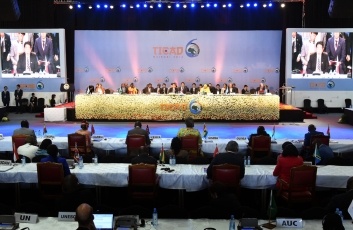 Mr. Fumio Kishida, Minister for Foreign Affairs, who is visiting Nairobi, the Republic of Kenya, to attend the Sixth Tokyo International Conference on African Development (TICAD VI), attended Plenary Session 3 (Report from Each Thematic Session), commencing at 11:23 a.m. (local time: 5:23 p.m. Japan time) on Sunday, August 28, and served as co-chair (acting). The overview is as follows.

1 At Plenary Session 3, the overviews of the discussions at the Thematic Sessions held on August 27 were reported. With regard to Thematic Session 1, it was reported that structural economic transformation that reduces its dependency on primary products was raised as a means of responding to declining international resources prices, and participants shared a view on the importance of investing in quality infrastructure, including developing roads and ports and renewable energies (such as geothermal electric power generation), building food value chains and developing industrial human resources.

2 With regard to Thematic Session 2, it was reported that promoting resilient health systems was raised as a lesson learned from the outbreaks of infectious diseases such as the Ebola virus disease, and participants shared a view on the importance of putting people at the center with the coordinated efforts by the international community, in order to strengthen the capacity to prevent of, prepare for, and respond to public health crises, as well as to promote Universal Health Coverage (UHC).

3 With regard to Thematic Session 3, it was reported that promoting social stability in order to respond to the threats to peace and stability and the increased risk of natural disasters arising from climate change was raised, and participants shared a view on the importance of issues such as employment generation through job training for women and youth, strengthening public security capabilities, disaster risk reduction and food security.

4 Additionally, a draft of the Nairobi Declaration and Implementation Plan, the TICAD VI outcome document scheduled to be adopted at the Closing Session, was presented, and its content was discussed.

5 Lastly, Minister Kishida stated that the Nairobi Declaration and Implementation Plan emphasizes African ownership and partnership with the international community, reflecting the significance of TICAD VI, as the first TICAD to be held in Africa. Minister Kishida also expressed his gratitude for the vigorous discussions at each Thematic Session and this session.