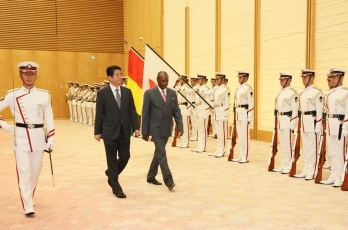 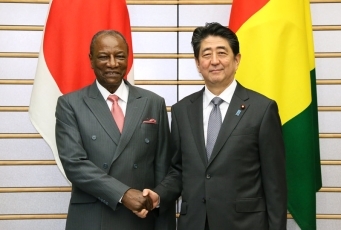 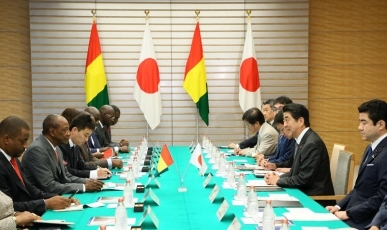 On June 20, commencing at 6:15 p.m. for approximately 50 minutes, Mr. Shinzo Abe, Prime Minister of Japan, held a summit meeting with H.E. Professor Alpha Condé, President of the Republic of Guinea, who was making an Official Working Visit to Japan. The overview of the meeting is as follows.

Following the summit meeting, a signing of exchange of notes on the provision of medical equipment (Economic and Social Development Program) took place in the presence of the two leaders. Subsequently the two leaders held a joint press occasion at which President Condé invited Prime Minister Abe to visit Guinea and the two leaders issued a joint statement between Japan and Guinea (French (PDF)

). Prime Minister Abe then hosted a dinner where the two leaders exchanged views on a broad range of topics relating to bilateral relations, including soccer exchanges.

(1) At the beginning, Prime Minister Abe extended his condolences over the loss of Guinean soldiers’ lives in the attack on United Nations (UN) peacekeepers in Mali on June 8. Prime Minister Abe welcomed meeting President Condé again following the G7 Summit and President Condé’s first official visit to Japan as President of Guinea. Prime Minister Abe also mentioned the decision to hold the Seventh Tokyo International Conference on African Development (TICAD7) in Yokohama in 2019, and explained that he hopes to further strengthen cooperation between Japan and Africa, together with President Condé, who is chairing the African Union (AU) this year.

(2) In response, President Condé expressed gratitude for the support Japan has extended to Guinea since its independence and the contributions Japan is making to African development through (PDF)

the TICAD process, and explained that he intends to capitalize on this visit to Japan as an opportunity to further develop the relationship between Japan and Guinea and Japan and Africa.

Prime Minister Abe explained that the Government of Japan has decided to establish a field office of Japan International Cooperation Agency (JICA) in Conakry, along with stating that Japan will continue to contribute to the development of Guinea, including through cooperation in the agricultural and fisheries fields, the development of national highways in order to enhance connectivity in West Africa overall, and the provision of medical equipment in order to strengthen the health system. In response, President Condé expressed gratitude for Japan’s cooperation, beginning with the establishment of the JICA

3. Regional affairs and strengthening cooperation in the international arena

The two leaders shared recognition that UNSC reform should be advanced, including increasing both permanent and non-permanent members. Additionally, the two leaders emphasized the importance of striving to advance the process by promoting communication and discussion on the basis of intergovernmental negotiations on UNSC reform.

The two leaders shared recognition regarding the need to maintain a free and open maritime order based on the rule of law and the importance of peaceful resolution of maritime disputes in the interests of ensuring regional stability and peace. In addition, Prime Minister Abe explained the situation in the East and South China Sea.

The two leaders shared the view that from the standpoint of supporting the sustainable utilization of living marine resources, they will continue to collaborate closely at the IWC.

(b) Prime Minister Abe held summit meetings with President Condé on the occasion of the TICAD V in 2013 and the TICAD VI in 2016.

(c) While Prime Minister Abe was visiting the Italian Republic to attend the G7 Taormina Summit, he held a meeting with President Condé, who attended the G7 Outreach Meeting.

Page Top
Back to Japan-Guinea Relations