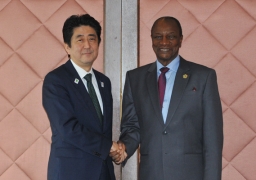 (Photo: Cabinet Public Relations Office)
1. At the beginning of the meeting, Prime Minister Abe welcomed the visit of President Condé, and expressed his hope for mutual development of Japan and Africa in the wake of TICAD V, which marks the 20th anniversary of TICAD process. In response, President Condé touched upon the long history of Japan-Guinea’s relation, mentioning Japan’s support for Guinea joining the United Nations in 1958, and said that although there was a time of struggle due to issues in domestic politics, Guinea now hopes to strengthen ties with Japan as it moves forward in the pathway towards democracy.
2. President Condé continued to state that Guinea has significant potential with its rich mineral resources, expressing his hope for the participation of Japanese companies in the mineral resources development in Guinea, and showed expectations for the resumed assistance from Japan.
3. Prime Minister Abe expressed his respect the fact that democratization in Guinea continued to push forward under President Condé’s leadership, and announced that, from the viewpoint of hoping for establishing democracy and maintaining stability in Guinea, Japan would provide assistance for Guinea’s National Assembly elections scheduled to be held at the end of this month and for achieving stability and growth in the country. Prime Minister Abe continued to point out the importance of maintaining public order and improving the investment environment. In respond, President Condé stated that the legal system concerning investment is now under development and also expressed his intention to deal with issues in public security.
4. The two parties also exchanged opinions on the cooperation in the international arena, including development in Africa.