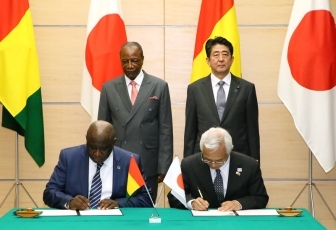 3. From 2014 until the end of 2015, the Ebola virus disease has spread widely in Guinea and the country suffered serious social and economic damages. One of the main causes of the occurrence of such an unprecedented situation is said to be the country’s vulnerable health systems. Presently, the Guinean Government is making efforts to strengthen the country’s health systems based on its post-Ebola socio-economic recovery strategy (2015-2017) and Japan’s assistance is expected to also contribute to this effort.

4. During the Sixth Tokyo International Conference on African Development held in August 2016, Japan declared it will “strengthen the Capacity for Response as well as Prevention and Preparedness against Public Health Emergencies” and “promote universal health coverage in Africa (UHC).” (PDF)

This assistance is the materialization of this commitment.