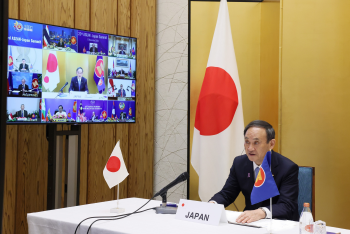 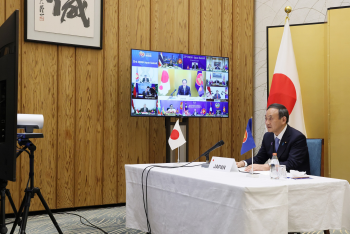 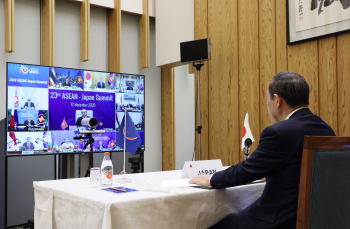 23rd Japan-ASEAN Summit Meeting 3 Photo: Cabinet Public Relations Office
On Thursday, November 12, commencing at 4:45 p.m. and concluding at 6:00 p.m., the Japan-ASEAN Summit Meeting and an event to mark the establishment of the ASEAN Centre for Public Health Emergencies and Emerging Diseases were both held online. Prime Minister SUGA Yoshihide attended from Japan, The overview of the meeting focusing on his remarks is as follows (Chairman: Mr. Nguyen Xuan Phuc, Prime Minister of the Socialist Republic of Vietnam).

(3) The ASEAN Outlook on the Indo-Pacific(AOIP)

(1) In addition to congratulating Prime Minister Suga on his appointment as Prime Minister, the ASEAN members expressed their appreciation for Japan's cooperation with ASEAN, including Japan's support for the establishment of the ASEAN Centre for Emerging Diseases and Public Health Emergencies and its decision to contribute 1 million US dollars to the COVID-19 ASEAN Response Fund. The ASEAN members also expressed their support for resolving the abductions issue by North Korea.

(2) Prime Minister Suga made the remarks outlined below.

(North Korea)
The full implementation of United Nations Security Council resolutions is essential to achieve the complete, verifiable and irreversible dismantlement (CVID) of all weapons of mass destruction and ballistic missiles of all ranges of North Korea. Japan also asks for understanding and cooperation toward the early resolution of the abductions issue.

(Hong Kong)
The recent situation in Hong Kong is also cause for grave concern.

After a short video clip was shown at the start of the event, Prime Minister Phuc announced the establishment of the ASEAN Centre for Public Health Emergencies and Emerging Diseases. Prime Minister Suga closed the event by offering his congratulatory message stating that Japan will continue to provide  support, including through technical cooperation by JICA through dispatching experts and conducting training, to ensure that the Centre develops into a robust organization that will protect ASEAN's people from the threat posed by infectious diseases.