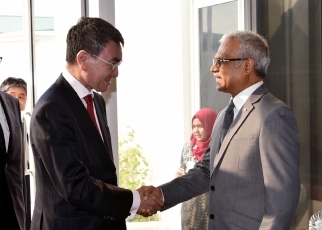 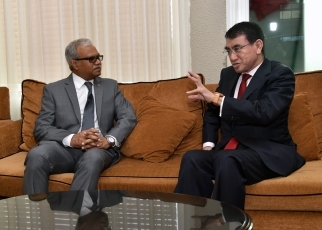 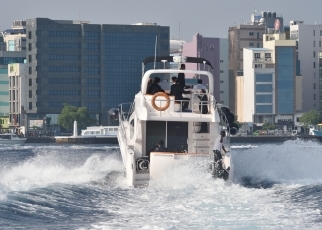 1. Minister Kono expressed his pleasure in realizing this visit to the Maldives, the first visit by a foreign minister of Japan, and in meeting with Foreign Minister Asim again after the Japan-Maldives Foreign Ministers’ Meeting in November last year. Minister Kono expressed his hopes for pushing forward cooperation in a wide range of fields including tourism, environmental and climate change measures, disaster risk reduction including the introduction of terrestrial digital broadcasting, and culture and sports. In response, Foreign Minister Asim welcomed Minister Kono’s visit to the Maldives as the first by a foreign minister of Japan. Minister Asim conveyed gratitude for the support by Japan that has been contributing to the development of the economy and society of the Maldives, and expressed his hopes for further investment by Japanese companies.

2. Minister Kono stated that he hoped to strengthen Japan’s cooperative relationship with the Maldives in the field of maritime security and maritime safety under the Free and Open Indo-Pacific Strategy

. The two ministers shared the view that a maritime order based on the rule of law is the foundation for peace and prosperity of the international community, and that they would promote cooperation in this field.

3. Minister Kono stated that it was necessary to strengthen pressure on North Korea through full implementation of the relevant UNSC resolutions and requested cooperation for the early resolution of the abductions issue. Foreign Minister Asim stated that he will support Japan’s position.

4. The two ministers shared the view that they would launch a director-general level policy dialogue in order to advance cooperation in a wide range of fields including politics, economy and culture.

Page Top
Back to Japan-Maldives Relations